The helicopter belonging to Vichai Srivaddhanaprabha, the Thai billionaire owner of Leicester City Football Club, crashed outside the King Power Stadium in a ball of flames after a Premier League match on Saturday.

According to unconfirmed reports the Thai tycoon was on board the helicopter.

And there are more unconfirmed reports that England manager Gareth Southgate had arrived at the game in the helicopter and was also among those on board as it left.

Is that the reason information is slow in being released? Obviously somebody knows who was onboard. A security guard, steward or perhaps the groundsman would have seen who boarded. Maybe one of them held the door open.

So why is information about a fairly nondescript helicopter crash, apparently involving a Thai businessman, so high in the news feeds around the world.

Sources close to the club later told Reuters that his daughter was also in the helicopter during the crash, along with two pilots and a fifth person.

There were no confirmed details on whether anyone on board survived and neither Srivaddhanaprabha’s representatives, nor the police, have yet released an official statement.

Who else was onboard and was it a high-profile British VIP?

Multiple videos from the scene show a massive fire at the stadium’s car park and emergency services arriving.

A Sky Sports News reporter said that witnesses saw the helicopter taking off from the pitch inside the stadium “as it does after every game.”

The pilot then apparently lost control of the helicopter.

John Butcher, who was near the stadium at the time of the crash, told the BBC his nephew saw the helicopter spiral out of control apparently due to a faulty rear propeller.

“Within a second it dropped like a stone to the floor … Luckily it did spiral for a little while and everybody sort of ran, sort of scattered. As far as we are aware nobody around the car park was caught up in this problem.” – Developing story 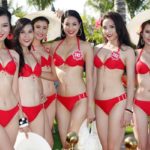 Bikini or no bikini: The big question in Vietnam