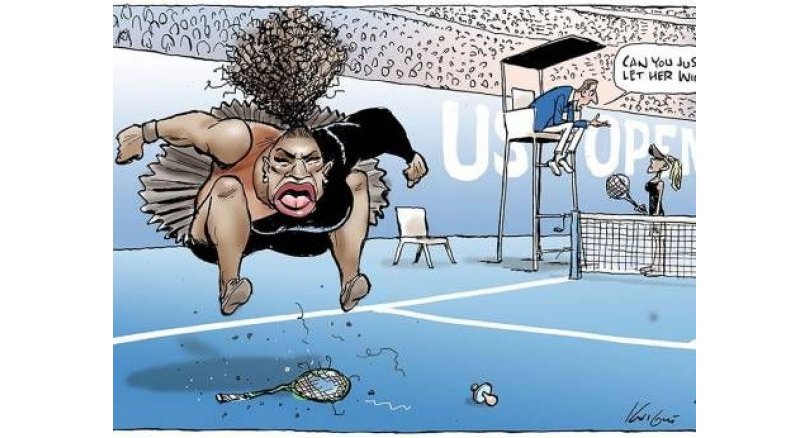 Mark Knight’s caricature, published in Melbourne’s Herald Sun newspaper on Monday, showed a butch and fat-lipped Williams throwing a temper tantrum at the US Open.

In the midst of losing Saturday’s final, the 23-time Grand Slam champion smashed her racquet and called the umpire a “thief” and a “liar”.

She was deducted a point and received a US$17,000 fine, stirring the tennis world and sparking a broader debate about double standards toward men and women in the sport.

In Knight’s cartoon, Williams was seen jumping up and down having spat out a dummy as the umpire asks Haitian-Japanese tournament winner Naomi Osaka “can’t you just let her win?”.

Knight, who has a reputation for controversial cartoons, was pilloried from far and wide for his portrayal — including by a member of the US Congress and a large portion of the 22,000 people who commented on his Twitter post showing the drawing.

The detractors included author JK Rowling, who said: “Well done on reducing one of the greatest sportswomen alive to racist and sexist tropes and turning a second great sportswoman into a faceless prop.”

Knight responded to the criticism by pointing out that he had drawn an unflattering portrayal of Australian male tennis star Nick Kyrgios “behaving badly”.

“Don’t bring gender into it when it’s all about behaviour,” he said.

“Criticism of Mark Knight’s Serena Williams cartoon shows the world has gone too PC & misunderstands the role of news media cartoons and satire,” he said.

“Poor behaviour in any sport needs to be called out.”

The Washington Post ran a searing post about Knight’s cartoon, calling it “racist” and reminiscent of the era of racial segregation in the United States.

Other US media pointed out that Osaka was portrayed as petite and feminine with jet blonde straight hair — in real life she has dark curly hair with blonde streaks and is taller than Williams.

Australia is a highly multicultural country, but also sees frequent public dust-ups about the use of racially and sexually loaded language.

During the match she was given three code violations by Carlos Ramos — the first for receiving coaching, the second for racquet abuse and the third for verbal abuse of the umpire.

The second and third violations earned Williams a point penalty and then a game penalty, giving Osaka a 5-3 second-set lead that effectively gifted her the title.