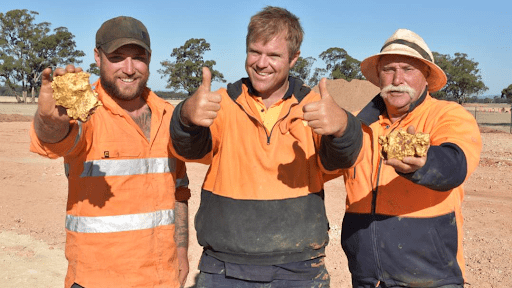 Three Australian blokes have struggled to hold back their emotions after striking it rich in rural Victoria.

After scouring through a stretch of land, they have walked away with two massive gold nuggets thought to be worth around $350,000.

The region used to be massive for gold miners back in the day and even once boasted the world’s deepest mine, at 4,613 feet. But even though the boom has certainly waned, it doesn’t mean there aren’t little nuggets to be found here and there.

The trio used a digger to clear away the top soil and then the aptly named Poseidon Crew used large metal detectors to see if there was any gold in em hills.

Incredibly, not only did the blokes find one clump of the pricey metal, they found two.

Their big find has been captured on Discovery’s Aussie Gold Hunters and it tracked them discovering the 78 and 45 ounce nuggets near Tarnagulla.

Brent said: “We were in the grips of not being able to freely mine because we were unable to get the permits and licences through in the time frame.

“When you find large piece, you don’t automatically get excited. In the first instance of seeing a big lump of gold, it’s not instantly joyous, it’s more a sense of accomplishment and history. The monetary side comes in last.”

Ethan added: “My reaction is bit different to Brent. He is like a child in candy shop. I see the prospect of making a lot of money. When you see the size of the nugget and start working out what it’s worth, that’s pure relief.

“I’m always excited to see it and hold it. That part is exciting – holding (a gold nugget) the size of a baseball is a surreal feeling.”

Based off current gold prices, their combined 3.5kg nuggets could bring them around $350,000. Not too bad for a day at the office – even though days or even weeks’ worth of work went into this big moment.

They could earn about 30 per cent more if they end up selling the nuggets to a collector, according to 7News.

Ethan and Brent have been looking for their big pay day for years and have come across thousands of gold nuggets in that time. But none have come even remotely close to what they discovered near Tarnagulla. 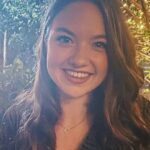 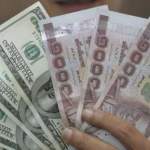