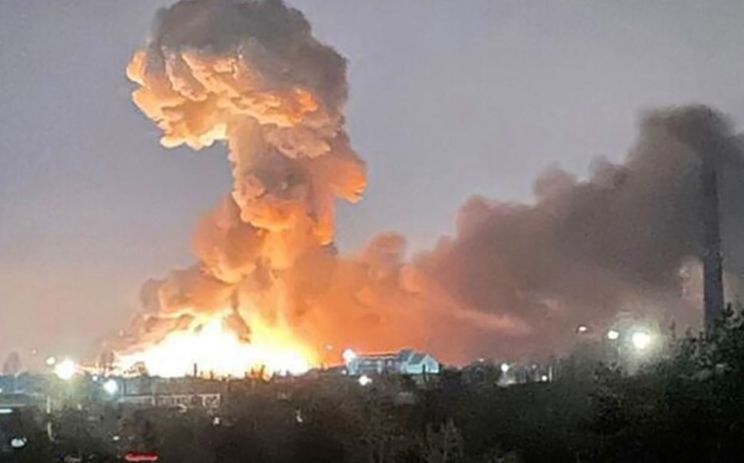 Russian forces have launched a military assault on neighbouring Ukraine, crossing its borders and bombing targets near big cities.

In a pre-dawn TV statement Russian President Vladimir Putin said Russia did not plan to occupy Ukraine and demanded that its military lay down their arms.

Ukraine said that “Putin has launched a full-scale invasion of Ukraine”.

Russia’s military breached the border in a number of places, in the north, south and east, including from Belarus, a long-time Russian ally. There are reports of fighting in some parts of eastern Ukraine.

About 10 civilians are believed to have been killed, including six in an air strike in Brovary near the capital Kyiv. A man was also killed in shelling outside the major eastern city of Kharkiv.

A Ukrainian presidential adviser said that more than 40 soldiers had died and dozens more were wounded. Ukraine said it had killed 50 Russian troops and shot down six Russian aircraft, but this has not been verified.

Ukrainian President Volodymyr Zelensky announced martial law across all of Ukraine, severed all diplomatic relations with Russia and said weapons would be distributed to anyone who wanted them.

We’re ready for anything.

We’ll defeat everyone, because we are Ukraine,” he said in a video statement. Ahead of Russia’s attack he had made a last-ditch attempt to avert a conflict, warning that Russia could start “a major war in Europe” and urging Russian citizens to oppose it.

Warning sirens blared across the capital, which has a population of almost three million. Traffic queued to leave the city and crowds sought shelter in Kyiv’s metro stations. Several neighbouring countries have begun preparations to take in a large number of refugees.

“We don’t understand what we should do now,” one woman called Svetlana told the BBC. “We’re now going to a place where we can be safe and we hope we can leave safely. We have family in Mariupol and now they’re very nervous.”

In the metro, a couple with a toddler followed developments on their phones and asked: “Where are Nato?”

Mark, a 27-year-old sales executive said he was ready to be called up to fight: “We don’t have another way,” he said.

What Russia has targeted

Russia first launched strikes on Ukraine’s military infrastructure and border guard units, according to Mr Zelensky. Then Ukrainian forces said Russian military vehicles had crossed the border near Kharkiv in the north, Luhansk in the east, Russian-annexed Crimea in the south and from Belarus too. Belarus’s authoritarian leader Alexander Lukashenko said his country’s military were not involved but could be if needed.

Russian tanks were later seen on the outskirts of Kharkiv, a city of 1.4 million people. Russian forces also reportedly landed by sea at Ukraine’s major port cities of Odesa on the Black Sea and Mariupol on the internal Sea of Azov.

Ukraine’s army said Kyiv’s Boryspil international airport was among a number of airfields that had been bombed, along with military headquarters and warehouses in the big cities of Kyiv, Dnipro, Kharkiv and Mariupol.

Footage verified by the BBC showed missiles slamming into an airport in the western city of Ivano-Frankivsk.

The Russian leader launched the “special military operation” by repeating a number of unfounded claims he has made this week, including alleging that Ukraine’s democratically elected government had been responsible for eight years of genocide.

He said the goal was demilitarisation and “denazification” of Ukraine. Hours earlier Ukraine’s president had asked how a people who lost eight million of its citizens fighting Nazis could support Nazism. “How could I be a Nazi?” said Mr Zelensky, who is himself Jewish.

Mr Putin also warned that any outside power intervening on Ukraine’s behalf would face an “instant” response.

Neighbouring countries have reacted to the crisis.

In the Baltic republic of Estonia which borders Russia, Prime Minister Kaja Kallas said a number of Nato allies that shared borders with Russia had agreed to launch consultations under Nato’s Article 4. Under the defensive alliance’s treaty, Nato can be brought together if any member fears their independence or territory is under threat.

“Russia’s widespread aggression is a threat to the entire world and to all Nato countries,” she said.

“President Putin, in the name of humanity, bring your troops back to Russia,” said UN Secretary-General António Guterres.

Ukraine’s Western allies had repeatedly warned that Russia was poised to invade, despite repeated denials from Moscow. The US, EU, UK and Japan imposed sanctions against leading Russians, Russian banks and MPs who backed the move.

In a televised address, UK Prime Minister Boris Johnson said that the “hideous and barbaric venture by Vladimir Putin must end in failure”.

Addressing Russians, he said: “I cannot believe this is being done in your name, or that you really want the pariah status it will bring to the Putin regime.” He told Ukrainians that the UK was “on your side”.

US President Joe Biden said the world would hold Russia accountable. He is expected to address Americans on Thursday about consequences Russia will face.

France‘s President Emmanuel Macron said the attack would have “deep, lasting consequences for our lives”.

EU foreign policy chief Josep Borrell said “these are among the darkest hours for Europe since World War Two”.

Earlier this week Russia’s president announced he was recognising the independence of two self-proclaimed people’s republics of Donetsk and Luhansk in eastern Ukraine.

The breakaway regions were seized by Russian-backed rebels after Russia invaded Crimea in 2014. Mr Putin launched that attack after mass street protests in Ukraine that ousted pro-Russian President Viktor Yanukovych.

Since then more than 14,000 people have died in the east in a conflict between the rebels and Ukrainian forces. A shaky ceasefire had held but there has been a surge in violations in recent days.

Mr Putin said the military operation’s objective was to defend the people in the breakaway areas.

Kyiv and its Western allies have repeatedly rejected as absurd Mr Putin’s claims that Ukraine was being run by neo-Nazis, instead pointing out that Ukraine was now a nation with growing democratic institutions, unlike an authoritarian Russia.

Fears of a Russian attack have been rising for months.

Mr Putin has repeatedly accused the US and its allies of ignoring Russia’s demands to prevent Ukraine from joining the Nato military alliance and offer Moscow security guarantees. 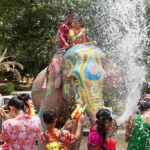 No travel restrictions during Songkran this year 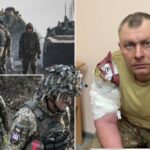