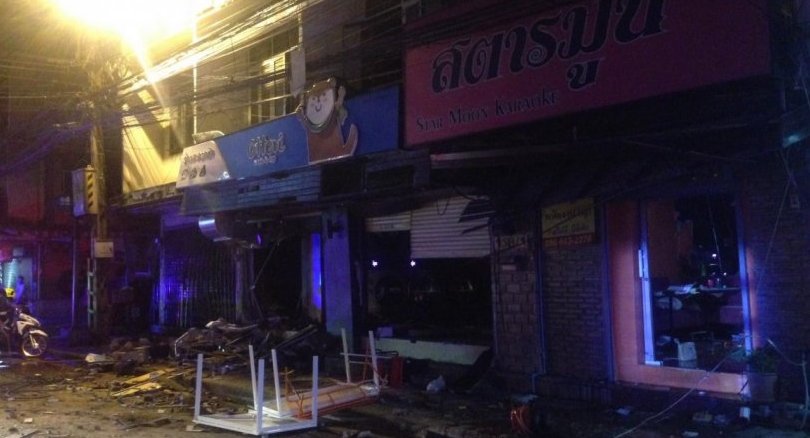 Eight people were injured when gas leaking from tumble dryers in a 24-hour laundromat in Bangkok’s Din Daeng district exploded in the early hours of Monday.

Sutthisarn police station was alerted at 2.30am to the explosion at the laundromat, which is located in a shophouse at the front of Soi Inthamara 36.

When police and rescuers arrived at the scene, they found that blast had caused severe damage inside the shop and to the buildings and vehicles around it.

The shop, which opened just three days ago, was offering a free promotional service.

Police found four 48-kg gas cylinders connected to the dryers stacked in a double-deck row. Two other spare cylinders were found nearby.

The walls of an auto spare parts shop to the right side of the laundromat and an adjacent restaurant were demolished in the blast.

The glass front of a beauty shop in the same row was also damaged.

The blast damaged a car and a motorcycle in front of the laundromat while several stalls on the opposite side of the road suffered damage from the concrete debris that rained down on them.

Two witnesses, Pirapong Chaiyaburi and Attapol Kongsuk, told police that they took their clothes to wash at 2am but all the machines were busy as customers took advantage of the free service.

The two were waiting on the opposite side of road when they smelt gas and informed the building owner, who was selling food at the connecting restaurant.

They, along with other patrons were waiting outside for the laundromat owner to arrive, when the explosion occurred.

Pirapong said he and Attapol were shielded by the canvas in a shop and were safe. Other bystanders and passersby were injured by flying debris.

Laundromat owner Kawin Nithassanacharukul, confirmed the promotion and added that he had bought both electric and gas-fuelled cloth dryers from China.

Pol Lt Col Adisak Seniyut, deputy inspector of the Sutthisarn police station, said the explosion was caused by a gas leak but forensic evidence will be gathered before an official conclusion can be reached and legal action taken against those responsible.

Chinese billionaire arrested in US over sexual misconduct allegations