Home » Chinese billionaire arrested in US over sexual misconduct allegations

The Minneapolis Police Department said the investigation remained active and would not confirm details of the arrest or the allegations against the 45-year-old Liu.

In the state of Minnesota, “criminal sexual conduct” encompasses a broad spectrum of nonconsensual sexual activity.

In a statement posted on Chinese social media network Weibo, JD.com confirmed that Liu had been arrested over what it described as a false allegation during a business trip.

The statement, contradicting US police, added authorities found no evidence of misconduct and released Liu to continue his trip.

Founded in 1998, the Fortune Global 500 company is China’s second-largest e-commerce firm and an aggressive competitor of Alibaba.

The company says it offers a “one stop” shopping experience to over 300 million active customers in China, with same- and next day-delivery as standard.

In June, Google announced it would invest more than half a billion dollars into JD.com as part of a move to expand retail services around the world.

The firms will marry JD’s supply chain and logistics experience with Google technology to create “next generation” personalized retail in regions including Southeast Asia, the US and Europe, both companies said in a statement. 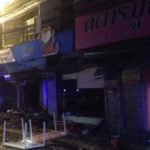 8 injured in explosion at Bangkok laundromat