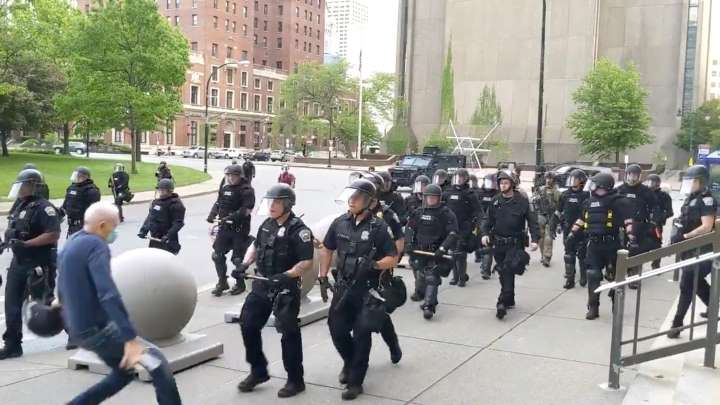 All 57 members of the Buffalo Police Department’s Emergency Response Team have resigned following the suspension of two officers who were seen pushing a 75-year-old man to the ground during a protest Thursday.

In the video from WBFO, one officer appears to push Martin Gugino with his arm as another uses his baton, forcing the man backward as he stumbles and falls to the ground. Gugino is then seen bleeding from his ears while flat on the pavement. Another officer calls for an EMT as the rest of the team walks on past the injured man.

The Buffalo Police Department wrote on Facebook that Commissioner Byron Lockwood “immediately suspended two police officers tonight who were seen on video pushing an elderly man to the ground” and an internal investigation has been launched as well.

Buffalo Mayor Byron Brown then issued a statement on Twitter, writing that the victim is “in stable but serious condition” at a local hospital. Brown noted that the “physical altercation” occurred during an “illegal demonstration beyond the curfew,” which was 8 p.m. local time as protests across the United States have broken out following the killing of George Floyd at the hands of police.

Officers Aaron Torglaski and Robert McCabe were charged with second-degree assault during their video arraignments on Saturday, according to ABC News, which reported that the men, who were released on their own recognizance, both entered no guilty pleas and are expected back in court on July 20.

“Mr. Gugino has been a longtime peaceful protester, human rights advocate, and overall fan of the U.S. Constitution for many years. At this time, Mr. Gugino is in serious but stable condition. He is alert and oriented,” said Kelly V. Zarcone, Gugino’s attorney, in a statement obtained by ABC News.

New York State Gov. Andrew Cuomo supported the suspension of the officers, saying Friday that the video “disturbs your basic sense of decency and humanity.”

THREAD: I am told it is the ENTIRE Emergency Reaponse team. The Union tells me it fully understands their “disgust” “These officers were simply following orders given by DPC Joe Gramaglia to clear the Square” @wkbw

Following their fellow officers’ suspension, the rest of the Emergency Response Team members stepped down from the tactical unit but have not quit the police department, The Buffalo News reported.

WKBW reporter Hannah Buehler broke the news of the resignations on Twitter Friday afternoon, writing that the officers stepped down as a show of support for those who were suspended. “The Union tells me it fully understands their ‘disgust,’” she wrote. “‘These officers were simply following orders given by DPC Joe Gramaglia to clear the Square.’ ”

However, two officers who were formerly part of the Emergency Response Team later told WKBW that their resignation was not a show of support.

Speaking on the condition of anonymity, one of the officers told the outlet they quit because the union said they would not legally back them anymore. “I think it sends the wrong message that ‘we’re backing our own’ and that’s not the case,” an officer said, according to WKBW.

Though the resignations have raised questions about how police will be able to respond to emergencies without the response team, Brown said the city has “a contingency plan.”

“I can say that Buffalo will be safe this weekend,” the mayor said at a news conference on Friday evening. 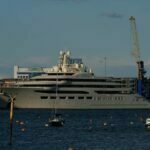 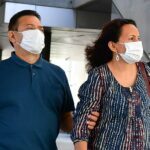