Home » Video: Why you should ALWAYS wear a seatbelt

Why you should ALWAYS wear a seatbelt: Shocking moment speeding car crashes headfirst into Florida toll plaza and violently EJECTS passenger through windscreen

Horrific video footage shows a car driving at full speed into a toll plaza, leading to one of the passengers being violently ejected from the vehicle.

The crash took place at around 7:15am on June 3 near St. Cloud, Florida in Osceola County.

The driver of the car fails to slow down as it approaches the toll plaza on the Florida Turnpike, according to WESH-TV.

At this point, the driver of the vehicle climbs out of the smoldering vehicle and begins walking toward

The car is seen slamming into a barrier. The impact of the crash sent one of the passenger hurtling what seemed like 20 feet in the air.

There was also debris from the car, pieces of which were sent flying into the air and strewn across the toll lane. 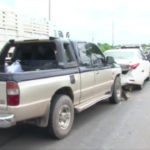