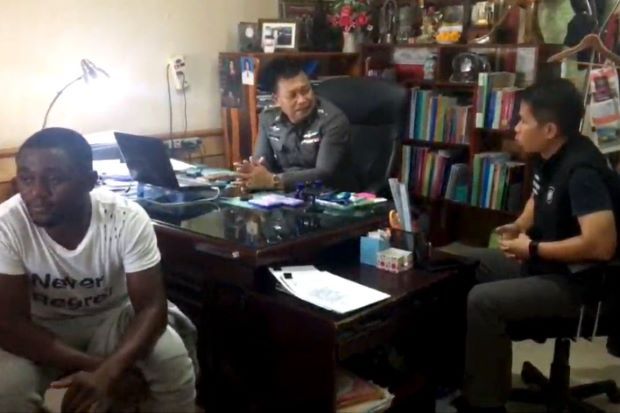 Cameroon language teacher and his friend arrested for  gang rape

The 25-year-old suspect identified only as Carauwas was apprehended at noon at a Kalasin school where he worked as an English-language teacher, said Muang Ubon Ratchathani police inspector Pol Lt-Colonel Bowornsak Khamrangsi, who led the operation. The suspect’s compatriot, William Inkokumokoko, also 25, was arrested later. The Ubon Ratchathani Court issued arrest warrants for the pair following a 24-year-old victim’s complaint to police on Friday. She said she had gone clubbing on Thursday night and then went to meet Carauwas, her boyfriend of four months, at a hotel room at about 4 am on Friday. Carauwas and his friend were in the room when she arrived. She said the two men raped her and she later was able to push them off the bed and ran out of the room before alerting police at about 5 am. The men had fled the hotel by the time police arrived. Police investigated the scene and applied for arrest warrants based on the hotel’s CCTV footage. Bangkok Jack

At least 22 people’s kills at Stampede in Mumbai