Home » At least 22 people’s kills at Stampede in Mumbai

At least 22 people’s kills at Stampede in Mumbai

A rush-hour stampede during a sudden monsoon downpour at a railway station in India’s financial hub of Mumbai killed at least 22 people and wounded more than 30, an Indian state official said on Friday.

The cause of the stampede on a bridge at the city’s central Elphinstone station during the rainstorm was being investigated, a police official at the site said.” Two of the injured are in serious condition,” said Deepak Sawant, the health minister of the western state of Maharashtra surrounding Mumbai, who provided the estimate of casualties.

The stampede took place after the cloudburst caught commuters off guard, prompting scores to scurry for cover under the roof of the station’s pedestrian overbridge, said Akash Koteja, one of the injured. “Trains were rolling in and some people wanted to get out of the station, but others were not making way. When a few tried, it led to a stampede,” said Mr. Koteja.

The bridge is usually crowded at that time of day, as it also serves as an exit route for passengers getting off trains at an adjoining railway station, he added. Manish Mishra, a witness who helped some of the injured, said the situation worsened as police and emergency officials did not respond immediately or enforce crowd-control measures. 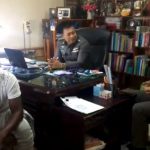 Cameroon language teacher and his friend arrested for gang rape