A woman found 15 years ago in a British national park was finally identified Tuesday as a Thai national from Udon Thani province.

North Yorkshire police confirmed the identity of what had become known as the “Lady of the Hills” since its 2004 discovery as Lamduan Armitage, who went by Lamduan Seekanya before she married a Briton.

Long after the corpse’s discovery in the Yorkshire Dales National Park settled into an enduring mystery, Lamduan was identified by DNA that matched her 72-year-old mother, Joomsri Seekanya.

The search for Lamduan garnered attention in January after her family said it had spent 14 years looking for her. Since then, DNA tests and inquiries were carried out to confirm Lamduan’s identity with the help of the Thai Women Network in the UK.

Lamduan moved to the United Kingdom in 1991 after marrying Englishman David Armitage. Her body was found on the Pennine Way in Ribblesdale on Sept. 20, 2004. A funeral was held in 2007 after nobody claimed the body. A headstone was erected reading “The Lady of the Hills.”

Though she was found partially unclothed, an exact cause of death was never established because of the body’s advanced state of decomposition. Police concluded she had not been stabbed, bludgeoned or shot.

Her husband, David Armitage, quietly left England and moved to Thailand after friends and family told him that she had disappeared, according to The Sun. He now works as a teacher in Kanchanaburi province and told the British tabloid that he didn’t kill his wife. He also said he’d been advised by the British Embassy not to discuss the case.

Police in England are still seeking information from anyone who knew Lamduan or her family in the time between 1991 and September 2004, “no matter how small or seemingly insignificant” to help establish the facts of her life and death. 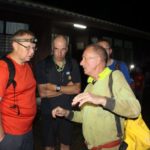