Plenty of parents play the occasional prank on their kids, but one dad took it to a new level when he hid a 12-inch sex toy in his son’s bag. 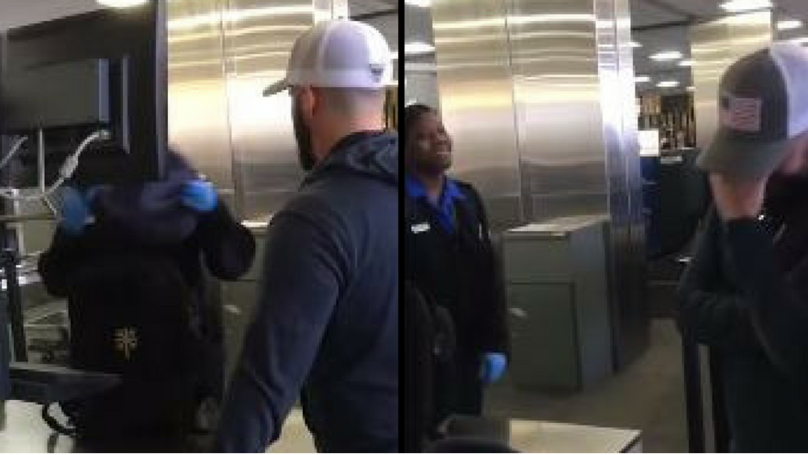 His poor unsuspecting son, who has not been named, was left completely red-faced when he was stopped at the baggage check – only for the assistant to pull out the toy for all to see.

In the video you see Ted’s son waiting innocently as the baggage check assistant starts going through his bag.

She pulls out his sleeping pillow and a clear plastic bag meant for liquids – and that’s when the son gets his first glimpse of the sex toy.

He quickly turns to his travelling companions, behind the camera, with a look of complete horror and sheer embarrassment on his face.

There’s no hiding now – the bagging assistant spots the toy, and Ted and his playful companions cannot hold back their laughter any longer.

Even the airport assistant can’t keep her cool as she also fights to hold back her giggling.

She says to the son: “Look at you, you don’t know what’s in your bag.”

A very embarrassed son eventually makes his eye contact with the camera and says: “Assholes.”

One of his more remorseful buddies then approaches to give him a hug and at that point he clocks onto how his dad managed to sneak the rogue toy into his bag.

He says: “That’s why you all wanted me to go and smoke a cigarette.”

But it’s the baggage assistant you have to feel sorry for – she was only doing her job after all.

The dad sees this and can be heard saying to her: “Sorry for wasting your time, ma’am,” as she is then left to repack the son’s bag.

The video has been viewed over 330,000 times on social media since being uploaded.

This isn’t the first time a group of rowdy lads has pranked a buddy at the airport and it almost certainly won’t be the last.

Last year one guy turned up to the airport for his stag do, only to find out his friends had booked him on a completely different flight to the rest of them.

The poor stag was left waiting in the airport for four hours until his flight.