E-Cig Explosion: The shocking moment a man’s e-cigarette exploded in his pocket, leaving him in ‘agony’ with burns, has been caught on camera. 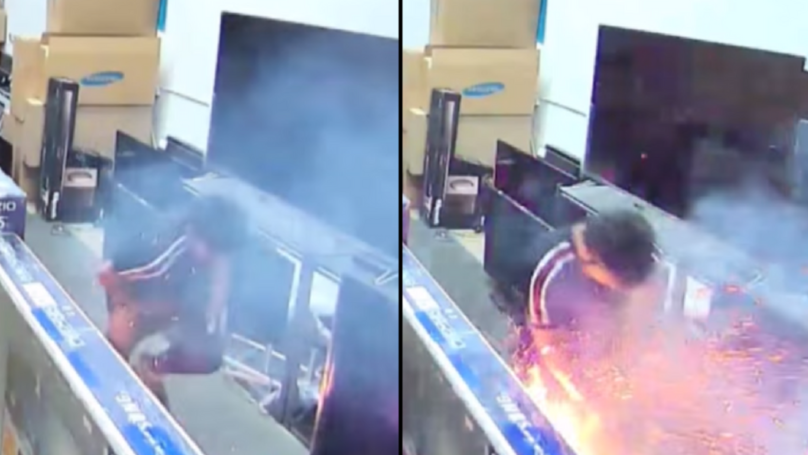 Twenty-four-year-old Mohamad Zayid Abdihdy was out shopping at a HDTV Outlet store in Anaheim, California, when the device exploded setting his pocket alight.

CCTV footage from the shop shows Abdihdy casually measuring up TVs before a bright flash can be seen. He then begins desperately trying to pat out the flames while frantically jumping around.

Abdihdy told NBC: “Basically, it blew up in my pocket.

When asked if he would continue to vape, he replied: “I’m going back to hookah.”

Antelmolare Guzman, manager at the store where it happened, told the news outlet: “We turn around and all we see is smoke and something caught on fire.

“The gentleman, he is running out to the front of the office, and he is screaming and yelling. Apparently, all of his right leg was completely burnt all the way down. Part of his private parts were also kind of affected with the whole fire thing.”

Ouch. And here I was thinking e-cigs were the safer option.

He added: “The store smelled of burnt skin.” Delightful.

Despite poor Adbihdy quite possibly having suffered an injured dick, our man Guzman isn’t one to let a golden opportunity pass him by – he said the incident gave him a solid idea for a new sales pitch.

I know you’re dying to hear it, so here you go: “Come see us, please. We’ve got everything discounted. There are literally exploding deals!” Someone give that a man a bloody raise.

This isn’t the first time some unlucky bugger has been burnt by his vape. Just last month, Jason Curmi, 46, was left with burns to his nether regions in a similar incident.

Jason, from London, said: “It was also only two inches from my privates and if I’d been wearing different clothing, it could have blown them to bits.

“The whole thing scared the crap out of me.

“I lost a lot of skin – they were borderline second to third degree burns, but I just escaped having skin grafts.

“It was just like a loud explosion, lots of fire coming out of my trousers and the room, which was quite large as it was a conference room, was covered in soot. It smelled very toxic.

“I had my vaping device on my desk. I carry a battery in my pocket as I’m out all day so I bring a spare one just in case.

“I felt a very slight warmth, like you would with a mobile phone, but thought nothing of it and it’s obviously exploded.

“It’s shredded my jeans, and my boxers. It’s a miracle it didn’t do more damage to be honest.

“It could have set me on fire.”

Thankfully, Jason wasn’t left with serious injuries, but said it hurts to walk and sit down, before adding that the ‘real damage’ was psychological.

New Crossbreed ‘Super Snakes’ Are On The Rise In Florida