The world’s most expensive white truffle has been grown successfully for the first time in Thailand at the Chiang Mai University, it was revealed.

The growing of this delicacy which is priced up to 160,000 baht a kilogram will enable Thailand to conduct further research and development that will see commercial white truffle farming in the country in near future.

It will enable Thailand to become one of the countries which can produce white truffles for export and generate high revenue for the country.

At yesterday’s press conference, the white truffles has been found first in the Doi Stuhep-Pui Nation Park by the Department of Biology of Chiang Mai University.

In 2015, the team continued their research and found another new species Tuber lannaense.

But in the latest research, the team found the Italian white truffle or Tuber magnatum, which is the most expensive truffles in the world, and it was successfully grown.

The successful growing by the team challenges all theories that suggest truffles cannot grow in tropical areas, they said.

Furthermore, the team was also able to extract the truffle scent to infuse it with salt and olive oil.

They said the research team is now studying whether it is possible to develop a truffles farm in Thailand.

This discovery not only challenged all theory saying that truffles could not be found in the tropical area, but also can help boost the economy of the nation they said. King cobra headbutting a window to get inside 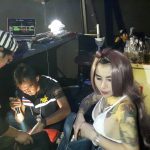