Home » Woman jailed for having cocaine-fuelled sex with an Alsatian A WOMAN has been jailed after she had a cocaine-fuelled with an Alsatian.

Claire Goodier, 60, had “fantasised about it for a number of years” before carrying out the “disgusting” act, a court heard.

Goodier, of Spencer Street in Northwich, today appeared at Chester Crown Court and was jailed for 20 months.

She had previously been convicted of possessing indecent images of children, back in 2006 and 2009.

Prosecutor Paulinus Barnes told the court that she was caught when police called to on July 19, 2019, to carry out a routine check due to her being on the sex offenders register.

Cops took a laptop – which showed that Goodier had been searching for beastiality content online, reports Northwich Guardian.

Two years later, when a full search of the computer was carried out, officer discovered 31 indecent images of Goodier taking part in a sex act with an Alsatian.

Mr Barnes said: “She admitted possession of the images.

“She said she had fantasised about it for a number of years and after talking about it with people in Northwich, was put in touch with others in Bournemouth.

“She travelled down there in December 2018 and took part in the sex act with other people and the Alsatian dog.”

When she was arrested on June 17 of this year, cops also found a memory stick in her handbag, which showed the same images and 3.5 grammes of cocaine.

When she committed the sex act on December 16 2018 she was also in breach of a previous suspended sentence order.

He said: “This incident took place some three years ago.

“The picture now is one of sporadic offending.

“This is not a case where the offending is getting more and more serious.

“She will do everything asked of her by the court and there are tentative signs of improvement in her attitude and approach.”

But Judge Everett jailed Goodier for 20 months – telling her: “You are a long, long way from changing your life.

You deceitfully took part in a cocaine-fuelled incident with other persons.

“Since the terrible offence took place you kept the images unashamedly for your own sexual gratification.

“In the middle of all this, you failed to comply with the terms of an order, which some might say is a minor breach, but it’s not for the first time.

“Your record is appalling and it could be said you were astonishingly lucky not to go to prison previously.

“A message must go out that if you commit such disgusting behavior then you must go to prison.” Headteacher and boyfriend raped girl under 13 in sick videos 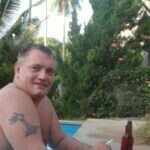