Home » Headteacher and boyfriend raped girl under 13 in sick videos A DEPUTY headteacher who “giggled” as she raped a young girl in sickening videos with her sadistic boyfriend has been jailed for 13 years.

The sick pair filmed themselves abusing and raping the victim – with Morris even laughing as she attacked the girl, who was aged under 13.

She today admitted 18 child sex offences that are unrelated to her job as safeguarding lead at St George’s Central Church of England Primary School near Wigan.

Morris, who wore glasses, a face mask and a cream cable knit jumper, was jailed for 13 years at Liverpool Crown Court.

Her boyfriend David Morris, 52, who previously admitted a string of child sex offences, was caged for 16 years.

The court heard how the pair met on Plenty of Fish after separating from their partners in 2016.

He added: “The communication between them became graphic and depraved, which led to some of their sexual fantasies becoming a reality.”

The couple’s “sordid secret” was revealed when police found a conversation about sexual abuse of children involving David Morris in a phone seized during a search warrant.

He was arrested, but later cautioned and released.

A number of devices were seized, which showed the recordings of rape and sexual abuse.

Mr Wyn Williams said both defendants were arrested the following day as they attempted to flee to the Lake District in a camper van with £10,000.

As well as videos and images, officers trawled through 175,000 pages of sexually explicit messages between the couple.

The pair also set up a group chat with the victim in which they would talk about how they would abuse her.

He also admitted taking indecent images under the category A – the most serious levels – and B and C.

The defendant, of Eccleston, St Helens, further pleaded guilty to distributing indecent images, two counts of engaging in sexual communications with a child, three counts of voyeurism, possession of an extreme pornographic image and possession of a prohibited image of a child.

Damion Lloyd, from the Crown Prosecution Service, said the case was the “pinnacle” of the most “disgusting and depraved types of acts that people can discuss and do”.

He added: “It truly appears like both of them were equally involved.

“They’ve formed this horrendous sexual interest in children and they’ve acted out their most unpleasant fantasies on the victim.

“It feels like the relationship between them is just a self-feeding cycle where they have effectively driven each other on to worse and worse acts.”

Maths and RE teacher Julie has worked at St George’s Central Church of England Primary School for 10 years.

Parents were told of the alleged offences in November in a letter from the headteacher Mark Grogan.

He said: “It is important to emphasise that the charges in relation to the alleged offences are not connected with our school.”

The head added that he realises that it “will come as a shock for everyone within the school community”. 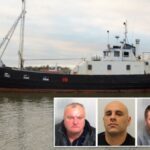 Woman jailed for having cocaine-fuelled sex with an Alsatian