Seven people were injured – two seriously – after a 30-year-old local woman, allegedly driving under the influence of alcohol, ploughed her pickup truck into seven motorcycles parked on the roadside in Chaiyaphum province early on Sunday.

Umari tried to flee the scene but her black Toyota truck, which had suffered severe damage to both the front tyres and front body – could not travel more than five kilometres from the accident scene. The crash took place on the outbound lane of Chaiyaphum-Tan Tanote Road in Ban Mor Din Daeng area a little past midnight on Sunday. 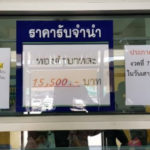 Hunt on in Sukhothai for two inmates who escaped from prison