The manhunt for two drug inmates, who escaped from a provincial prison on Saturday evening, continued in Sukhothai province on Sunday.

The two inmates apparently slipped out of the jail on Saturday night by climbing up their detention cell’s ceiling shaft and scaling down the east-side prison fence by making a rope out of torn blankets.

One of them then stole a motorcycle that was parked in front of a nearby house with a key still in the ignition hole, according to homeowner Krongthong Sangthong who ran out when she heard the motorcycle engine start but it was too late. 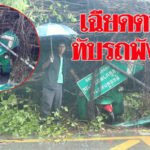