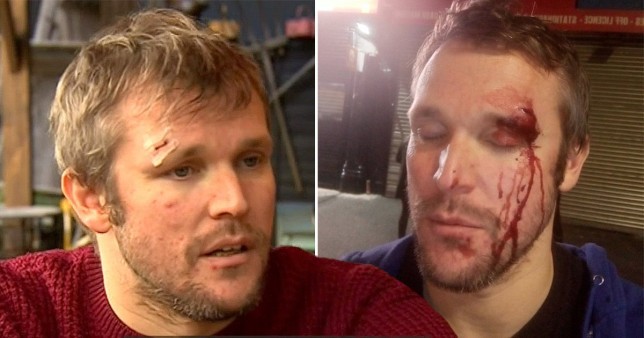 A man was left with blood streaming down his face after a wine bottle was thrown at his head in a homophobic attack.

John-Paul Kesseler, 38, was holding hands with a close friend as he returned to a hotel after a night out in Birmingham’s Gay Village.

At around 5am on Sunday morning, a man standing outside his car saw the pair and told them ‘you should not be doing that’.

John-Paul responded ‘what me?’, to which the man grabbed a bottle of wine from his car and thrown it at him.

‘I was very lucky, he had a bad aim, it was a glancing blow which cut my eyebrow open and left me dazed,’ John-Paul told the BBC.

As he took his phone out to call the police, he says the assailant started walking towards him with a pole and took a swing.

The man hit John-Paul, but he put his arm up to block it and said ‘what are you doing?’

He says the man hit him once before getting in his car, outside a 24-hour shop on Holloway Circus, and driving away.

After being assaulted, John-Paul and his friend were then subjected to homophobic heckles from passers-by.

Taunts included ‘We don’t agree with that LGBTQ stuff’ and ‘you were asking for it’.

John-Paul told BirminghamLive: ‘If you feel threatened by a couple who are just holding hands and doing nothing, you have issues.

‘The police have a hard job. This has been a growing issue for some time and it’s getting worse.’

John-Paul, from the suburb of Moseley, spent several hours at the Queen Elizabeth Hospital as he was treated for the cut to his eyebrow.

Given a spate of homophobic attacks in Birmingham recently, he said he wasn’t surprised about his assault.

He added: ‘Everything seems to be turning on its head – people are more open with their hatred, people feel emboldened to act on their prejudices.’

On August 6, a drag queen was targeted in a suspected urine throwing attack outside The Nightingale Club, in the Gay Village.

Matt Williams, who goes by the stage name Dahliah Rivers, was wearing full drag when a man threw liquid out of a car window

The 26-year-old, who regularly performs at the popular LGBTQ+ venue, was struck in the face on Kent Street at about 2.30am.

But despite reporting the incident to West Midlands Police and receiving a crime reference number, the victim has had no contact from the force for more than two months.

Dahliah said: ‘The area is notorious for a car full of people driving down the road hurling abuse. The police are aware of it.

‘I have to get people now to walk me down to The Village, which is where I get changed. I don’t feel safe even walking down one street.’

CCTV footage captured the attack and has been passed to police. But no progress on the case appears to have been passed onto the victim.

A West Midlands Police spokesman said: ‘This was a really unpleasant incident in which a liquid, thought to be urine, was thrown at the victim.

‘We understand the impact this kind of assault can have on victims and the wider community.

‘We’re sorry that due to a high volume of cases our teams are working through, including some very nasty assaults and woundings, we’ve not yet been able to progress this investigation. We will make contact with the victim as soon as possible.

The force said police have stepped up patrols in the Gay Village in a bid to stop the surge in homophobic attacks. 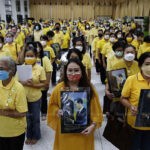 Good deeds as a tribute to His Majesty King Bhumibol Adulyadej 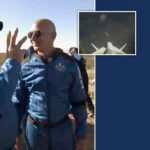