Jariyaporn, 32, from Loei’s Wang Saphung district, is accused of tricking the men into marrying her and then fleeing with their dowries and wedding gifts.

She allegedly married four men in one month in separate ceremonies.

Thirteen victims filed complaints with the Crime Suppression Bureau in Bangkok on Tuesday, claiming they were defrauded of anywhere from Bt100,000 to Bt500,000.

The victims, from various provinces, met her online and were convinced of her sincerity when she presented an elderly couple as her parents when the subject of a wedding and dowry came up.

Jariyaporn, who claimed her family had a fruit-selling business in many provinces, allegedly spent about two months in a relationship with each victim before bringing up the subject of marriage and managing to get them to wire the dowry to her. 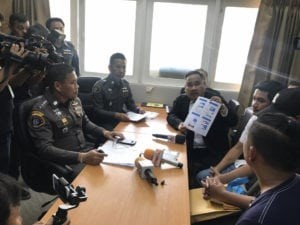 Lawyer Songkran Atchariyasap accompanied the plaintiffs as they made their complaints to CSB deputy commander Pol Colonel Suwat Saengnoom.

The complaints name Jariyaporn, her parents Boonliang and Samrong Buayai, and “Soiphetch Paleewan”, the name Jariyaporn used on Facebook and also on a bank account used in the alleged fraud.

Jariyaporn is charged under Section 342 of the Criminal Code – deceiving another person about your true identity for criminal purposes – which is punishable by up to five years in jail, a Bt10,000 fine or both. 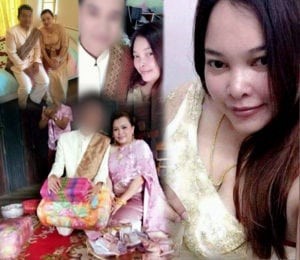 The police investigation found that Jariyaporn used to work for Loei local administrative organisation but she was fired in 2012 after the office discovered she was wanted over a separate fraud incident in which she allegedly duped people of between Bt100,000 and Bt130,000 with the false promise that she could get them jobs at a municipality office

Since the news broke late last week about her alleged online scam, she has disappeared and her house in Wang Saphung has been locked.

A 38-year-old victim who was duped of Bt500,000 said that he knew Jariyaporn for a month before she claimed to be pregnant and he decided to wed her in December 2015 to take care of her and the child.

However, she then fled with the money and he has been left to repay the debt at Bt20,000 a month.

Another victim said he knew Jariyaporn from Facebook since September 2016. They got romantically involved and he later sold his car to invest Bt180,000 in a business with her.

He also quit his job to do business with her but she postponed the wedding in January 2017 and disappeared.

Another man said he got to know Jariyaporn last December via Facebook and she duped him of Bt300,000 and gold ornaments which he gave her for the wedding in May.

A day after the ceremony, she left for her hometown and never came back, so he realised he had been duped.

A house in Pathum Thani that the woman claimed to be hers, and suggested as a wedding venue to many victims, was actually a rented property. When she fled she also took the furniture, including a television and an air conditioner.

Jariyaporn also allegedly cheated fruit vendors in Chumphon, Chanthaburi and Rayong by ordering fruit in bulk and failing to pay

What is the Songkran Festival in Thailand?