Home » What IS YOUR IDEAL full English breakfast?

Full English breakfasts are so popular that they’re pretty much offered throughout the day as all-day breakfast.

Pattaya has alot of places that serve Breakfast good and bad , whats your thoughts

According to the internet, full English breakfasts need:

Any sort of potato is frowned upon on a full English.

They’re seen as filler. If you even think of putting fries on, someone might get stabbed.

You could do bubble and squeak (potatoes and cabbage mixed together and fried) but even then, some people are going to come after you.

Do they serve hash browns with Full English breakfasts?

Some people serve hash browns with a full English and some people think it is sacrilegious.

Hash browns are more modern addition and that’s why they are so contentious.

When you do see hash browns on a full English, they typically tend to be the triangle frozen variety as opposed to home made shredded potatoes.

If you want a potato product that isn’t hash browns, bubble and squeak (fried potatoes and cabbage) is probably much more traditional.

Which kind of baked beans?

British baked beans are absolutely a key part of a full English.

British style beans are made with beans and a tomato sauce seasoned with carrots, celery and Worcestershire.

American style Southern baked beans are usually cooked with bacon and brown sugar, with a much more thick sauce.

Go for British style Heinz baked beans. A reader suggested Branson baked beans. We haven’t tried them but they’re spoken of very highly on the internet!

What to serve with a full English breakfast

Coffee or tea! Tea is traditionally English but coffee is perfectly acceptable too. Add milk, sugar, and/or cream based on personal preference. 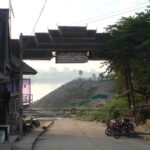 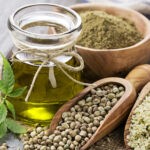