Two were killed and five injured when a car hit a roadside tree and two power poles before plunging into a roadside ditch in Lop Buri overnight on Tuesday, police said.

Police said the accident happened at 3.10am on the Phaholyothin road in Moo 8 village in Tambon Huay Pong of Khok Samrong district.

The traces on the road showed that the car hit a tree and then two power poles before flipping in the ditch.

The bodies and the injured were rushed to Khok Samrong Hospital.

Police suspect that the driver may have dozed off, causing the accident. 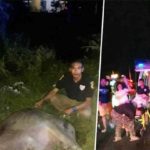