Two young boys drowned after sneaking away from their grandmother who was looking after them – to play in a pond.

Jinpat, aged three, and his cousin Toonsap, aged five, had been staying with their elderly relative while their mothers went to harvest crops.

But the best friends snook away from her house to splash around in a 10ft-deep man-made pool behind their wooden home in Chaiyaphum province on November 9.

Villagers raised the alarm after realising the kids were missing and suspected they had gone to their favourite pool, where they had played before.

Several men jumped into the water and tragically found their lifeless bodies below the surface after they had been underwater for at least 20 minutes.

Both boys were rushed to hospital but were pronounced dead a short time later.

Police Captain Teerapan Suntonwipaat, deputy head of investigations at Mueang Chaiyaphum Police Station, said they had received an emergency call at around 5pm.

He said: ‘’Relatives brought the drowned children out of the water in the village in the Huai Ton district and attempted resuccitation before an ambulance arrived with breathing apparatus.”

Police Major Suaaree Saagaew said that roads were cleared for an amabulance to rush the youngsters to Chaiyaphum Hoispital where they had both arrived by 6.30pm.

He added: ‘’Both children were pronounced dead due to a lack of oxygen for over one hour. There was nothing more that could be done for them.”

Jinpat’s mother Sopaa Chuasan, 21, said that her and her neighbours had gone into nearby fields to harvest crops when the tragedy happened.

‘’Other villagers ran to tell us that they had secretly gone to the water pond at the back of the village and they could not find them.

‘’They were under the water for 20 minutes or longer. I cannot think about what happened to them and their pain. I cannot ever forget this.’’ 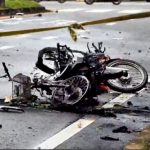 Woman’s face ravaged by sinusitis that turned into tumour