Home » Woman’s face ravaged by sinusitis that turned into tumour

A grandmother’s face has been ravaged after sinusitis grew into a large tumour – that now resembles an unsightly snout.

Editha Dadores, 71, started getting pains in her nostrils four years ago and visited doctors near her home in Puerto Princesa, a remote island in the Philippines.

The mother-of-six was given medication but after several more trips to the doctors her sinusitis flared up.

She underwent an operation mid-way through 2015 but despite another course of tablets the growth ballooned and caused the front of her skull to shatter.

The grandmother-of-16 has now been diagnosed with an Inverted papilloma and is currently in hospital while medics decide which specialist she should be referred to.

Editha’s daughter-in-law Renalyn, 33, said: ‘’My mother-in-law started having pain four years and this was diagnosed as sinusitis. The doctors warned that this could become cancerous.

‘’She has had a lot of treatment since then but nothing has stopped the tumour. It has been like watching a car crash in very slow motion and there’s nothing you can do to help.

‘’The tumour has grown so much it has destroyed her looks. It’s like a snout, like an ant-eater, and it’s not nice for her.

‘’She is not in pain now because she has medication. But talking, sleeping and eating are difficult for her. Her face has been badly damaged and the bones in her face are broken.’’

A picture taken in 2012 from when Editha was still healthy shows how her face appeared healthy.

But CT scans taken this month reveal the severe damage that the Inverted papilloma has done to her facial structure.

Doctors at a hospital in Palawan city where she is being treated are now unsure of the next move.

They recommended a facial reconstruction but told Editha’s family that the procedure would be risky.

Medics are now waiting for further test results before deciding where the elderly lady should be referred to next for treatment.

Renalyn added: ‘’We have been supported by a charity which has helped with some of the medical costs for my mother-in-law.

‘’The doctors are waiting to choose a hospital for her to be sent to for treatment from specialists. We hope that she will go to Manilla soon.

‘’She has four sons and two daughters and 16 grandchildren who all love her very much. She was still very beautiful before this.’’ 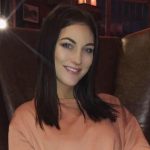