What’s the greatest thing about the internet? Unfettered access to news and information 24 hours a day, seven days a week?

The ability to email or Skype or FaceTime friends and loved ones from pretty much anywhere in the world?

No. The answer is: this video of twins listening to the Phil Collins super hit ‘In The Air Tonight’ for the first ever time. Watch below, and head straight for their reaction to the drum fill around the 4:50 mark

It’s the latest in a series called ‘First Time Hearing’ that Tim and Fred Williams – better known to viewers as TwinsthenewTend – have been doing.

Previous episodes show them listening and reacting to Dolly Parton’s ‘Jolene’, Bruce Springsteen’s ‘Dancing In The Dark’ and Janis Joplin and Big Brother And The Holding Company’s ‘Piece of My Heart’.

While thousands of people have watched and enjoyed their other videos, and sent in requests for other sons for them to listen to, viewers seem particularly taken with this one – and their reaction to the iconic and powerful drum beat that comes in unexpectedly almost five minutes into the song.

“That was cool how he did that,” says Fred, who, like his brother, appears visibly surprised and excited by that part of the song. “I ain’t never seen somebody drum a beat three minutes [into] a song.”

Moon director (and David Bowie’s son) Duncan Jones wrote: “Cracking up! Love this”, while comedienne Nicole Arbour wrote: “Yooooo y’all been sleeping on Phil Collins while I’ve been a stan since I could stand!”

Another Twitter user wrote: “These 2 teens listening to In The Air Tonight by Phil Collins for the first time is absolute gold”, while another simply wrote “Two teenagers get schooled by Phil Collins.”
Well yes, they did. And in the best possible way. 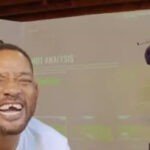 Jason Derulo ‘Knocks Out’ Will Smith’s Teeth With Golf Club