Truck knocks Down: Traffic locked up on Soi Pridi Banomyong 2 under the Chalong Rat expressway after a truck brought down three power poles in a chain reaction Tuesday morning.

JS100 traffic radio station reported that the accident happened at 7.30am when a truck hit a fibre optics cable and then hit a power pole, causing it to fall and pull two others down with it.

The poles blocked the road, causing traffic snarls on the soi and adjacent roads.

Metropolitan Electricity Authority workers rushed to the scene to clear away the fallen poles and install replacements. The operation was expected to take four hours to complete. 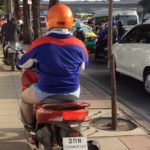