Thailand’s Deputy Prime Minister and Minister of Health Anutin Charnvirakul confirmed that tourists arriving in Thailand should stay overnight in a place where they can be reached. The word quarantine did not cross his lips at this announcement.

He expressed concern about Thailand’s reopening when he presented his 2022 plans to health officials across the country via online links.

During this announcement, he confirmed that potential tourists must undergo RT-PCR testing both before and after arrival in Thailand, be double-vaxed and have “fit-to-fly” documentation.

As a result, he promised better communication with the people when making policy decisions in the future.

As a dumb bear, I want to point out that there has been great confusion about what “no quarantine” means when visiting Thailand next month.

However, many people still think that one night is still a kind of quarantine.

Despite his promise of better communication, the minister did not elaborate on what kind of hotel the tourists should stay in, only that they should be reachable.

Meanwhile, Anutin claimed he had created 45,242 new public health jobs, provided benefits to employees and said his staff could have confidence in the system and other institutions.

He coined the slogan “Healthy People – Healthy Economy – Healthy Thailand” for his 2022 priorities.

He had devised a nine-point plan of measures to get the economy back on track, develop health systems at the local level, extend the universal 30 baht health coverage and pay particular attention to the health needs of the elderly.

Also one of his goals was better cancer care with more surgeries, chemotherapy and radiotherapy services available to the public in state hospitals.

He also mentioned his favorite hobbyhorse to which he owes his current position – promoting marijuana and hemp health products to “give people an income and create jobs”.

He thanked health workers across the country for their efforts in the pandemic and said he had been working on that 24/7 and issues with PM2.5 and flooding.

He claimed that Thailand had taken on and got through the challenge of the Covid19 virus and stressed that 2022 would see further challenges, especially to get the economy back on track and get more people back to work. 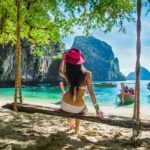 Reopening of 15 provinces to foreign tourists from Nov 1