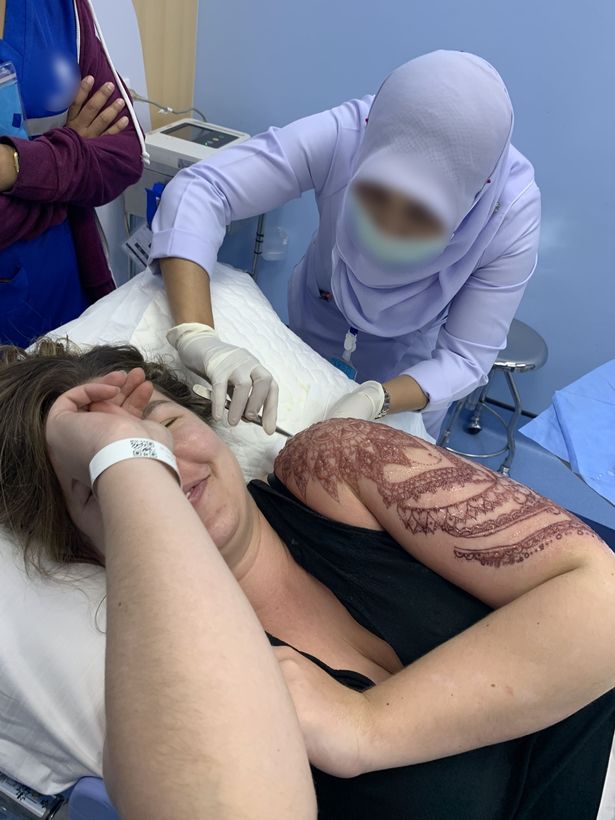 Hospital staff in Bangkok, Thailand, treated violinist Amanda Drish-Adolf’s chemical burn by popping the blisters and then scrubbing off the top of the fluid-filled bumps

A holidaymaker felt “claustrophobic” in her own skin after a £23 black henna tattoo in Thailand left her with a foot-long chemical burn and oozing blisters.

Amanda Drish-Adolf decided to get a large intricate design in Bangkok during an pre-children “bucket list” trip to with her husband Nick Adolf last month.

Violinist Amanda, 30, had a half-sleeve mandala-style design inked on her left arm – from the top of her shoulder down to her elbow.

Hours later, the black pigment flaked off and Amanda flaunted the dark design on her arm as she and IT programmer Nick, 30, explored the capital.

But two days later Amanda spotted she had developed a chemical burn on her arm that erupted in countless oozing blisters, leaving her needing hospital treatment.

Amanda was left with a 13in by 5in chemical burn that staff treated by popping the blisters and then scrubbing off the top of the fluid-filled bumps.

Concerned medics then applied antiseptic cream, bandaged the affected area and asked her to return for two follow-up hospital appointment, which in total cost £530.

It’s believed that the burn was caused by paraphenylenediamine (PPD) – a chemical commonly found in black henna and dark hair dyes.

Amanda, who is also a manager of education and community engagement manager at an orchestra, was forced to cancel plans they had to rock climb, swim, snorkel and kayak and instead sat on the beach or in their hotel room watching Netflix.

Amanda, from the US city of Des Moines, Iowa, said: “We’d really looked forward to it, it was a bucket list trip we’d picked specifically because of the beaches.

“Looking at all those crystal clear waters and knowing I couldn’t swim and do the things I wanted to do was heartbreaking, this was our big Asia trip we were taking before having kids.

“He felt guilty but I still wanted him to experience everything he could.

“I got full-on anxiety looking down at my arm and seeing what it looked like, it was disgusting.

“I’ve had anxiety in the past and luckily I had the forethought of bringing my meds with me.

“I was also having a lot of claustrophobic issues. Because my skin was so swollen I was claustrophobic in my skin and then having my arm wrapped tightly was making me very anxious.

“Also you want to have special holiday times with your husband and when you feel disgusting that doesn’t really happen.”

Amanda visited a pop-up vendor near their hotel on January 24 and paid £23 for the intricate design that took an hour to complete.

Amanda said it felt as though her skin was “burning” as the intricate design was painted onto her skin, but was assured it was a normal sensation.

She said: “I’ve had large henna, both true henna and black henna, tattoos two or three other times, but I’ve never had this reaction before.

“It felt like it was burning as it was being painted on, like the gel you put on when you have a sore muscle that feels hot and cold at the same time.

“I used Google Translate on my phone to tell the person painting it on that it was burning and was told ‘that’s normal’, the tingling stopped after it dried.

“Later that night I flaked off the paint and it looked great, I loved the piece, but it was really dark.

“Most of the time when henna is done it stains your skin red or light brown but this was black.

“It was fine for 24 hours, I had no reaction, but the next day [January 26] my arm started feeling hot to touch and little blisters popped up.

“I was concerned as I thought maybe I’d got sunburn on it, and when I popped the blisters clear liquid came out of them.

“In the evening the larger part of my arm that was coloured started to blister and that’s when I started to do my research about skin reactions to black henna.

“That’s when I realised we had a problem.”

That evening the couple visited a pharmacy and picked up saline solution, anti-itch cream and a steroid cream to treat the area.

Amanda diligently washed the area in bottled water, applied the creams and wrapped the affected areas in bandages for two days.

Despite taking care of the affected area, the couple realised Amanda needed hospital treatment on January 28th when her hands, feet and arms started swelling up.

Amanda said: “I was washing the thing constantly, keeping it wrapped and out of the sun.

“My hands and feet were swollen and when I was letting my arm air on the Tuesday evening I looked down and on the underside of my elbow there was a grapefruit-sized swelling.

“It was massive and it had a hard core in the middle.

“Once we saw that specific localised swelling we knew we had to go to the emergency room.”

The couple went to a nearby hospital at 10.30pm where Amanda’s arm was cleaned and dressed in bandages that would help draw out the infection.

The following day, January 29, Amanda’s blisters were popped and cleaned using cotton pads and antibiotic solution and then carefully wrapped in bandages.

She said: “I was pretty freaked out by it all. Everyone likes their arms, but I’m also a musician so I really need my arms to be highly functional.

“I was told the swelling was a symptom of the infection and that the blisters were going to be popped.

“Not only did she pop the blisters but she scrubbed all the tops of the blisters off with saline and antibiotic solution.

“It took about half an hour to do, the pain was just awful and I was crying.

“Every time she took a cotton pad off my arm it was covered in black, my body was rejecting the dye.”

After three appointments at the hospital staff, told her to keep the wound bandaged and dry until the infection had cleared up.

Now home, Amanda is urging people to avoid black henna and only get natural henna artwork providing the artist can tell you the ingredients in it.

She said: “Before this happened to me I didn’t know what PPD was.

“Natural henna should smell nice and you should be able to ask what ingredients are in it, if you can’t then I wouldn’t recommend getting it done on vacation.

“It’s doing amazing now. Right now it looks like the opposite of a black henna tattoo – instead of black, it’s white.

“I’ve been taking really good care of my arm by putting vitamin e oil, coconut oil and other really high quality serums and moisturisers on it.

“I’ve also been taking omega 3 fish oils and vitamin d, so I’m also doing internal stuff that’s good for my skin – it doesn’t look like it’s going to be a long-term scar.

“This story is one that will be told every time we talk about Thailand, which is a bummer.

“I felt guilty that I monopolised our time and we weren’t able to do some of our activities because of my arm.

“At the end of the day we got to see what a Thai hospital looks like – and not many people can say that.”

“In 2018, three quarters of people surveyed by the British Skin Foundation were not aware that ‘black henna’ contains PPD and that when used on the skin it can be dangerous, as well as drastically increasing the risk of allergic reactions to hair dye in the future.

“It’s not worth risking your skin health now or in the future, in addition to ruining your holiday.” 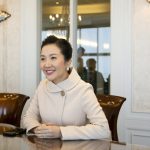