Not to get all “we are the virus” but here’s a small morsel of good news: rare sea turtles in Thailand have built their largest number of nests in 20 years thanks to the lack of tourists.

Yes, scientists in Phuket and Phang Ng said the lack of sunbathing humans have led to the return of rare leatherback sea turtles.

All in all, 11 nests have been found since November, including 84 hatchlings discovered in late March.

Kongkiat Kittiwatanawong, director of the Phuket Marine Biological Centre, said it was a “very good sign” after no nests had been found for the previous five years.

This is a very good sign for us because many areas for spawning have been destroyed by humans.

If we compare to the year before, we didn’t have this many spawn, because turtles have a high risk of getting killed by fishing gear and humans disturbing the beach.

Leatherback sea turtles are the largest in the world and are listed as an endangered species.
They lay eggs in quiet and dark areas but these were hard to come by when Thailand was welcoming roughly 40 million tourists per year.

Sopon Thongdee, director general of the Department of Marine and Coastal Resources, also said that sea waters have become visibly cleaner and corals are growing back.

Thailand reported its first case of coronavirus in January and has since seen a huge decline in tourism, with its number of expected visitors slashed by 50 per cent.
But while it’s good for nature, the decrease in tourists is likely to devastate the Thai economy, which depends on the industry. 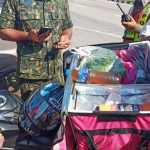