Over ten thousand Myanmar workers are expected to return home through border crossings including Mei Sai- Tachilek, Kawthoung-Ranong, and Phaya Thone Su (Three Pagoda’s Pass). According to the announcement, all the Myanmar workers must bring their Visa and must undergo the legal processes step-by-step at the crossings.

The dates for the returning workers was arranged between 5 to 30 April by officials and all the cost due to the Visa processes are free of charge during those dates. MT -EP 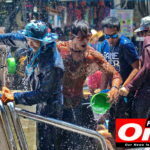 Songkran, everything you need to know about Thailand’s famous new year water fight