History fever is gripping Thailand and a growing number of Thais are wearing traditional dress, a phenomenon encouraged by the junta and the palace, and fuelled by a popular television soap opera.

But the trend, which began with a “winter fair” initiated by King Maha Vajiralongkorn in February, has been criticised by some as an attempt to glorify an era of absolute monarchy and gloss over the junta’s shortcomings nearly four years after it took power. “History has long been used by the elite to maintain their status in politics,” said Dr Anusorn Unno, dean of the Faculty of Sociology and Anthropology at Thammasat University.

Among the popular costumes are those worn during the reign of former King Chulalongkorn, known as Rama V, who ruled in 1868-1910 and is credited with saving Thailand from Western colonialism.

Television has also played a part. Love Destiny, a soap opera set during the 1656 to 1688 reign of King Narai the Great, has taken Thailand by storm. Many Thais are visiting the ancient capital of Ayutthaya, where scenes from Love Destiny take place. They pose for selfies dressed in traditional garb against the backdrop of the ruins. ST -EP

Thousands of workers expected to return home from Thailand for Thingyan 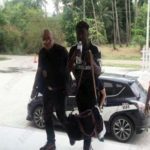