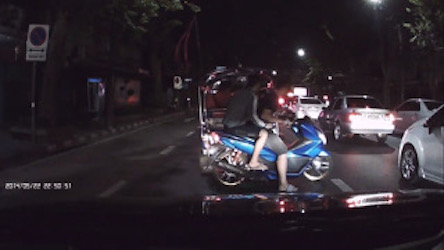 Dashcam footage captured the moment two thieves on motorcycles stole a tourist’s gold chain – while he was sitting in the back of a TUK TUK.

The European man and his partner were travelling inside the vehicle when it came to a stop in heavy traffic in Bangkok at 8pm.

Two thieves – who had been shadowing the couple along the road – pulled up behind the tuk tuk while the crook riding pillion reached over to the the man in an orange shirt.

He yanks off the man’s necklace before disappearing in the maze of traffic on the busy four-lane road at the height of rush hour.

The hapless tourist was left visibly frustrated as he search for his jewellery. His partner was later seen reaching over to check his neck as they look around in the back of the vehicle for the chain.

The driver who recorded the incident and wanted to remain anonymous said he believed the tourists were European.

He said: ‘’It was about 8pm on Tuesday night. I had returned from a restaurant with my father for dinner. I saw the two teenage gangsters riding a motorcycle and stop behind the tuk tuk and in front of our own car. I am sure the tourists were European.

‘’I was expecting the villains to be seen by the tourists. But the opportunity to take the gold chain came along and they snatched it and were gone quickly.

‘’I’m not sure what the tourists will be able to do about it but I hope that the criminals are prosecuted and this is a warning for people to be careful.’’

Thai police have not launched any action over the incident.

Under their law, theft at night using a motorcycle carries a more severe penalty than theft during the day time or when a motorcycle is not involved. 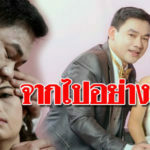 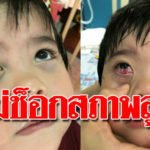