Home » That sinking feeling: Bangkok’s fight to stay above water

A FEW cities in the world are sinking ten times faster than sea levels are rising: Venice, NewOrleans, and Bangkok.

This is largely due to a combination of subsiding land due to human activity and rising sea levels caused by global warming.

“Land subsidence and sea-level rise are both happening, and they are both contributing to the same problem – larger and longer floods, and bigger inundation depth of floods,” the Netherlands’ Deltares Research Institute’s Dr. Gilles Erkens told the BBC.

Erkens pointed out that parts of Indonesia’s Jakarta, Vietnam’s Ho Chi Minh City, Thailand’s Bangkok and numerous other coastal urban settlements will sink below sea level in a matter of years unless action is taken.

“The most rigorous solution and the best one is to stop pumping groundwater for drinking water, but then, of course, you need a new source of drinking water for these cities.

“But Tokyo did that and subsidence more or less stopped, and in Venice, too, they have done that,” Erkens revealed.

Home to some 20 million people, Bangkok made international headlines in 2011 when it was inundated by one of the worst floods in its history. About 815 people were killed, with three missing, and 13.6 million people affected overall.

The megacity remained underwater for months, and the Thai economy suffered a US$40.7 billion loss.

Bangkok is set to turn 250 years old in 2032, but if action isn’t taken, the city could be under 5 ft of water by then. The latest estimates suggest that Bangkok is now sinking as fast as 2cm per year in parts of the city.

In fact, The Global Post reported that by 2100, Bangkok would be fully submerged and unliveable.

To prevent Bangkok from being swallowed up a little more each day, experts have offered a couple of solutions.

This includes mapping out an extensive water-management plan, erecting a massive seawall, or moving the capital to higher ground.

One of the more practical solutions is the construction of an 11-acre park that collects up to one million gallons of rainwater.

The raised green roof at the park “directs runoff water through sloped rain gardens, filtered in the constructed wetland, and then to the retention pond.”

The CU Centennial Park will also treat water from neighbouring areas by sending it through the wetland filtration system.

Other sections of the park include reading areas, walking and bike paths, herb gardens, and a recreation area. The public can easily access the CU Centennial Park on foot.

Meanwhile, a project for an even larger park that will mitigate flooding like the CU Centennial Park is currently underway.

Located on the campus of Bangkok’s Thammasat University, it’s expected to open in 2019. 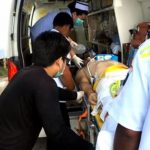