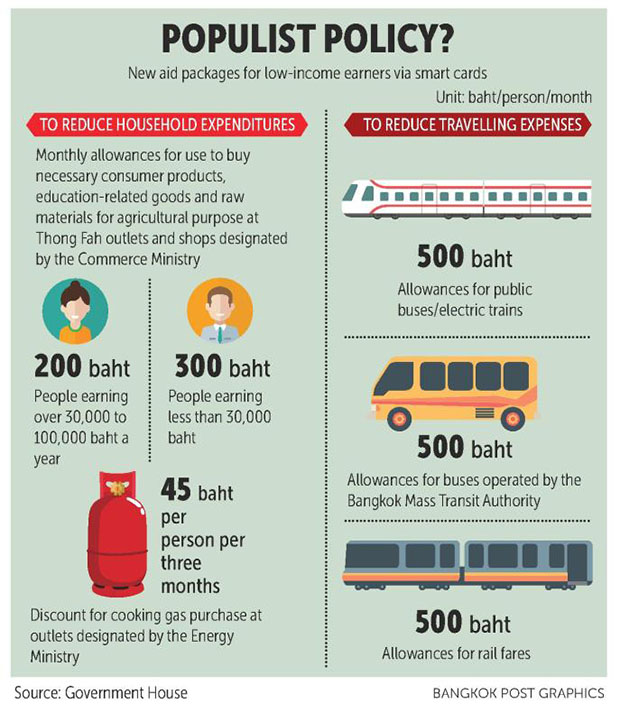 The package includes allowances for rides on public buses and trains, and subsidised utility bills. The scheme is scheduled to come into force on Oct 1, the start of fiscal 2018. According to Comptroller-General Suthirat Rattanachot, the package will be offered to 11.67 million qualified low-income earners who registered with the state agency. A total of 14.1 million low-income earners have registered this year with the government, up from 8.27 million in 2016. According to the government’s plan, the scheme’s recipients will receive smart cards that will contain their personal information and allow them access to state assistance such as subsidised transport, utility bills, staple goods to be bought at the Commerce Ministry’s Blue Flag shops, student uniforms, stationery and fertiliser. Moreover, the scheme’s recipients who earn under 30,000 baht a year will receive money to help them meet basic needs and cross the poverty line. The smart card will be distributed to recipients from September, and state aid will be given from Oct 1.

According to Miss Suthirat, the government has already allocated 46 billion baht in fiscal 2018 to finance the aid package. Funding will be allocated from the Pracha Rat Fund for Low-Income Earners worth 50 billion baht, which was established in May to reduce income disparity. This year’s criteria for the scheme require applicants to be unemployed or have had income of 100,000 baht or less last year to receive aid under the programme. Applicants’ savings, savings certificates and bond holdings must be worth less than 100,000 baht combined. If applicants own property, the area must not exceed 35 square metres for a condo unit, 25 square wah for a townhouse or 10 rai of land for agricultural purposes. Applicants must be Thai nationals aged 18 and over.

According to the Fiscal Policy Office, close to 8 million of the 11.6 million recipients live below the poverty line, which stands at 30,000 baht per annum. From 1988 to 2015, the Thais’ income surged nine times, while the number of those earning below the poverty line fell seven times. Wealth remains concentrated, with land held by the country’s wealthiest 10% reaching 878 times that owned by the poorest 10%. The number of urban people with access to the education system was twice that of people in rural areas. Bangkok Post