Thailand’s infamous “jet-set monk” was convicted of raping an underage girl Wednesday, a court official said, in a case that has rocked an already scandal-mired Buddhist clergy.

Wiraphon Sukphon, 39, earned his evocative moniker after footage emerged of him wearing designer sunglasses with a Louis Vuitton bag on a private jet.

He was extradited back to Thailand from the US last year, accused of the rape and duping donors who had given him money to build what he said would be the world’s largest emerald image of Buddha.

The girl was under the age of 15 and Wiraphon is said to have later fathered a child with her.

In Wednesday’s ruling, which found him guilty of rape and separating the girl from her parents, the court said he had given the Buddhist faith a “bad reputation”.

“He used his monkhood, which Thai people respect,” the court official told AFP.

Wiraphon’s 16-year custodial sentence punishment will be added to the 20-year prison term he received in August after being found guilty of multiple counts of fraud.

The military junta that seized power in 2014 has taken a hardline against monks acting outside the law and authorities have considered introducing digitised ID cards that could track members of the community with criminal histories.

Thailand is mostly Buddhist and the religion is woven into everyday life, but drug, sex and financial scandals have weighed on the Buddhist leadership and forced some high-profile collisions with law enforcement.

In May the abbot of the tourist-heavy “Golden Mount” temple in Bangkok was arrested after $4 million was found in bank accounts in his name.

Police are also investigating allegations of financial wrongdoing within the National Office of Buddhism.

And early last year, soldiers raided the temple of the mega-rich Dhammakaya sect on the outskirts of Bangkok to detain its controversial abbot on accusations of massive fraud.

He eluded capture and remains at large. 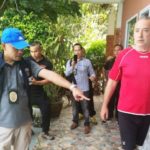 Travellers unaware they face 10-years jail for vaping in Thailand