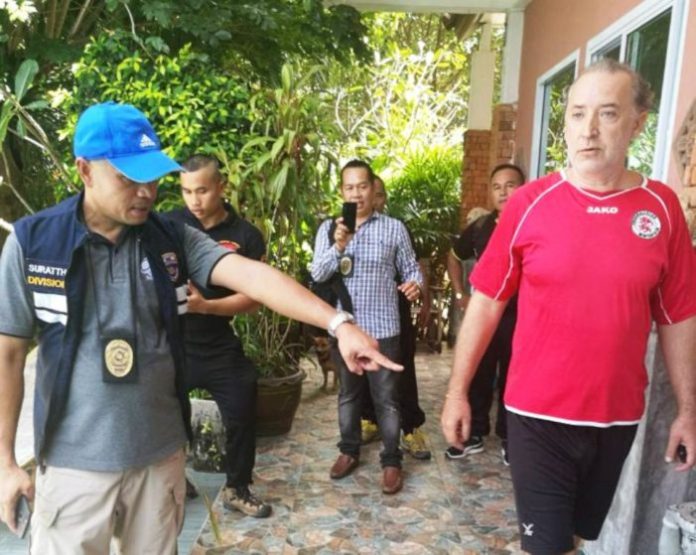 “We were checking his immigration records. Usually foreigners’ records will say when they exited or entered the country. This man was already in the records, but he didn’t exit the country to go anywhere,” Police Capt. Ampai Meemattu told Khaosod.

Ruzicka’s arrest is part of the “X-Ray Outlaw Foreigner” operation, in which police have targeted areas with large tourist populations to arrest foreigners overstaying their visas.

The raids – first started by recently appointed Immigration Bureau commander Maj. Gen. Surachet Hakpan – began in and around Bangkok, but have since spread nationwide.

Police say they received an anonymous tip who said Ruzicka had been living on Koh Tao for six years without leaving the country.

Ruzicka was caught at Sai Review Resort, where he was living with his Thai girlfriend in a hotel room.

Ruzicka overstayed his tourist visa for 2,266 days after it expired on July 2, 2012. He has been placed under Koh Tao police custody and will be deported, authorities said.

The Czech national was blacklisted and banned from entering Thailand for 10 years. Ampai said Ruzicka will be fined no more than 20,000 baht.

Foreigners who willingly contact authorities after overstaying their visa face shorter periods on the blacklist:

Those who overstay less than 90 days are not blacklisted. Overstaying one’s visa 90 to 365 days results in a one year ban.

One to three years bans offenders three years, while three to five years results in a five-year ban. Overstays of five years or more result in a decade-long ban. By Asaree Thaitrakulpanich

Should bacon be BANNED because it’s offensive to Muslims?