Thailand has made no progress in the past year in its efforts to combat human trafficking, especially of migrant workers, a global seafood industry watchdog said in a report released Thursday.

Last year, the U.S. State Department downgraded Thailand in its annual Trafficking in Persons (TIP) report, from Tier 2 to the Tier 2 Watch List – just a notch above the lowest rank, Tier 3 – because the government “did not demonstrate overall increasing efforts … even considering the impact of the COVID-19 pandemic on its anti-trafficking capacity.”

The Seafood Working Group (SWG), which put out Thursday’s report, said Thailand was “appropriately downgraded in 2021,” and recommended that the country remain at the Tier 2 Watch List in 2022 as well. The group is a coalition of Thai and international organizations working to end labor exploitation in the global seafood industry.

“Our research shows that numerous factors determining the downgrade have not shifted,” the report said, adding there is insufficient “evidence of increasing efforts to combat severe forms of trafficking in persons from the previous year,” especially with regard to labor trafficking.

SWG’s report is based on the findings for its submission to the State Department’s 2022 TIP report.

Thailand “has not increased its efforts to combat the problem of forced labor among migrant workers in proportion to the scope of the problem,” the group said.

It also alleged that the government had “failed to conduct regular, effective labor inspections of fishing vessels and seafood processing factories.”

Thai government officials did not immediately respond to BenarNews’ request for comment.

Better than before, but not enough

But according to a leader of the Thai fisheries industry, the situation has improved, although some problems remain and officials are lax in trying to remedy them. He criticized the SWG report, saying U.S. rules cannot be applied in Thailand.

“The forced labor problem in the Thai seafood industry is not as huge as it was before because of the strict conditions,” said Mongkol Sukcharoenkana, president of the National Fisheries Association of Thailand.

The new rules “have made migrant worker recruitment almost impossible,” he told BenarNews on Thursday, referring to provisions introduced during the past seven to eight years.

Mongkol said the punishment for flouting the rules is “harsh.” In fact, he said they have been devastating for the local industry. Being on the U.S. watch list has also hurt the industry, he said.

“I think if the U.S. listens to just NGOs, they will downgrade Thailand to Tier 3,” he said.

“I want the Thai government to see this problem and find solutions for the people in the seafood industry, instead of just letting the NGOs and the U.S. government take the lead,” Mongkol said.

Meanwhile, the government’s COVID-19 policies have “increased the vulnerability of migrant workers to labor trafficking and exploitation, including imposing lockdowns on migrant communities,” SWG said in its report.

“These policies deprived migrant workers of their basic needs, led to greater reliance on brokers, and increased their financial debt,” it said, adding that laborers were excluded from government social programs.

In June 2021, during the Delta-variant-fueled wave in the pandemic, some 80,000 migrant construction workers were put under lockdown in Thailand, according to a case study by SWG. The densely populated camps were closed off with no government support and the workers were not allowed to leave the premises even for food or other necessities.

The government also imposed “extreme quarantine policies for fishers, forcing many to stay aboard fishing vessels in order to prevent the spread of COVID-19,” it said.

In one case study, SWG said 24 workers, including 19 Burmese, “were not permitted to return to shore… for six months.” Instead, the workers were required to work every day without rest – some despite injuries.

“The government has not taken sufficient steps to systematically address labor abuses and indicators of forced labor in the fishing and seafood processing sectors, such as the retention of identity documents, abusive working and living conditions, intimidation and threats, physical violence, excessive overtime, and wage theft,” the report said.

Kunnawut Boonreak contributed to this report from Chiang Mai, Thailand. 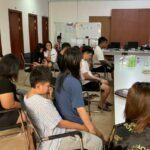 Thai citizens are being held against their will 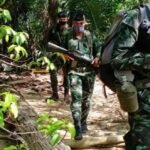