The remains of over 1000 migrant workers, including 600 from Myanmar who have died in Thailand during the past 15 years, remain unclaimed, a Thai official said.

Nataporn Boonyakon, special case inquiry officer of the Department of Special Investigation (DSI), told Myanmar reporters in Bangkok last week that the families of the deceased workers can claim their remains after securing DNA tests.

“According to DNA tests, 600 of the ‘ownerless’ dead bodies are Myanmar citizens,” she said, while the rest are believed to be from Cambodia, Laos and other neighbouring countries.

She also said that Myanmar families who have lost loved ones in the kingdom can go to the Labour Protection Network (LPN) in Mahar Chai to seek assistance retrieving the bodies.

If the DNA of the bodies and the family match, they will turn over the remains to the claimants, Nataporn said.

She said the remains date as far back as the 2004 tsunami, the DNA of the unidentified remains has been tested, and the information is being stored at the LPN. 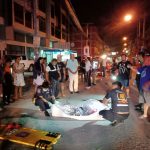 Motorbike driver dies after colliding with a power pole in Pattaya

Thailand’s problem is a lack of European visitors