Thailand has crowned its new King Maha Vajiralongkorn, marking the first ascension of a new monarch in seven decades.

In an elaborate ceremony on Saturday which fused ancient Buddhist and Hindu Brahmin rituals, Vajiralongkorn was doused with holy water by the most respected religious, political and royal figures in Thailand before the royal crown was placed on his head and he received the highly symbolic nine-tiered umbrella, vesting him as King Rama X of Thailand.

The coronation comes more than two years after Vajiralongkorn ascended the throne following the death of his father, the much beloved King Bhumibol.
Issuing his first command, Vajiralongkorn vowed to “rule the kingdom by following the guidance of the previous monarchs and rule with righteousness for the benefit of all people for eternity”.

While Thailand has been a constitutional monarchy since 1932, the king wields enormous power and influence in Thailand and is seen as the spiritual protector of the people. He is also protected from any criticism by some of the strictest lese majeste laws in the world.
The coronation ceremony is hugely significant in Thailand for it is not until the king has received the holy ablutions and anointment that he is fully consecrated as Devaraja, or “god-king”, and can take on his title as the upholder of Buddhism.

The ceremony, held at the Grand Palace in Bangkok, was mostly water-based and began with the ritual of ablution, known as Song Muratha Bhisek or royal purification, where the king was blessed with holy water taken from five rivers and four ponds in Thailand. Dressed in a simple white robe and white slippers, Vajiralongkorn received holy water poured onto his back, which had been collected from five rivers and four ponds across Thailand. Holy water was then poured onto his hands from 22 different vessels, all belonging to the previous nine Thai kings of the Chakri dynasty, as well as from conch shells, which are considered to be sacred.

Returning dressed in golden robes, the anointing ceremony began, where the king sat on an octagonal throne and received water into his hands from eight figures, including Thai prime minister Prayut Chan-ocha, the chief justice of the supreme court and the chief brahmin. It was then that Vajiralongkorn received, and sat beneath, a nine-tiered white umbrella, which officially marked his ascension to the throne.

As part of a newer ritual of the coronation, which was introduced by King Rama IV who ruled from 1851 to follow in western traditions, a gold crown weighing more than 7kg was placed on Vajiralongkorn’s head.

Present at the ceremony, dressed in dusky pink, was the king’s new wife, Suthida Tidjai, whom he married three days ago in a surprise ceremony in order to name her as the Queen of Thailand at the coronation. After Vajiralongkorn’s received the crown, his new bride knelt before him and he officially anointed her as Queen Suthida.

The ablution and anointment rituals marked the beginning of three days of celebrations and rituals marking the coronation of the new king. On Sunday he will lead a procession through Bangkok and visit some of the capital’s most sacred temples, with hundreds of thousands expected to line the streets. On Monday he will greet the people from the balcony of the Grand Palace. 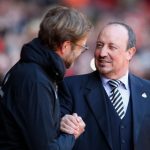 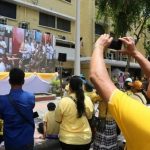 People brave the heat to watch broadcast of Royal Coronation