Less than a week after her boyfriend turned on her in court, a McKinney woman on Monday admitted she’d murdered her husband.

The guilty plea concludes a four-year saga that landed one person in prison for life and got her and one other person long prison sentences for carrying out the murder-for-hire plot.

Her trial was scheduled to take place later this month, when her boyfriend, Stephen Brockway, was expected to take the stand and reveal her role in the scheme.

Brockway, 35, pleaded guilty to the same charge last Thursday, but he took a deal for a shorter sentence— 28 years in prison, in exchange for his full cooperation and testimony in Pokai’s trial if called on.

The two drew up a plan for the February 2015 slaying of Richard Moore, 66, who was Pokai’s husband and at one point was Brockway’s best friend.

Pokai and Brockway were in the midst of an affair when they decided to murder Moore.

They hired Ronald Rosser, 55, of Longview who shot Moore multiple times as the man stepped out of the shower at his McKinney home.

Rosser was convicted of capital murder in March, drawing an automatic sentence of life in prison without parole.

He has since appealed. 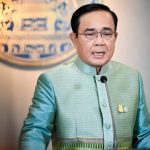 Mark KellyFebruary 18, 2020
A gunman killed one person and wounded another at a shopping mall in Bangkok today...
END_OF_DOCUMENT_TOKEN_TO_BE_REPLACED