Thai Researchers: Here’s a handy mobile app for forensic crime investigators, and it came from Naresuan University in Phitsanulok.

Researchers there studied the blowfly’s life cycle, realised the knowledge could help determine how long a human has been dead, and developed the “iParasites” app for investigators.

It can accurately detect the life-cycle stage of blowflies found feeding on corpses.

Forensic entomology has relatively few practitioners in the world, so Nophawan Bunchu, a lecturer in microbiology and parasitology at the school’s Faculty of Medical Sciences, collaborated with Zenith Medi Touch executive Parinya Boonchai to develop the application, which represents the fruit of a 20-year study of various fly species.

The app has already been patented and will be ready for general use early next year, Parinya said.

It contains a glossary of terms and a 3D QR-code scanner to determine a cadaver’s time of death based on the blowfly’s stage of life.

Noppawan said she had been studying flies since she was an undergraduate and knew there were benefits to be gained from the knowledge, in spite of a general dislike of flies among the public.

She said that, of the 96 species of flies found in Thailand, Chrysomya megacephala and Chrysomya rufifacies were most commonly linked to cadavers.

The use of arthropods like flies in forensic investigation to determine time of death has been done in the past. The parasite’s stage of life is useful in tracing time of death especially more than 24 hours, Noppawan said.

In murder cases, the killer invariably overlooks such potential indicators when destroying evidence to cover up the crime, but arthropods present in the corpse can also indicate whether the body was moved from the scene of the murder and identify toxins in the body, she said.

Care must be taken, however, since flies also can contaminate the scene with traces of unrelated blood.

Lottery spirit Gamo abducted in Rayong along with shrine and tree 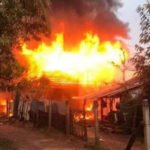