The Ministry of the Interior said that it has not canceled the immigration card, also known as the TM. 6 form, but will replace it with a new one, in response to widespread news last night that PM Prayuth Chan-ocha decided to scrap the form.

Earlier reports by PPTV and Bangkok Post said that the cancellation of the immigration card was implemented to address the hour-long queue’s flyers face when entering Thailand via major airports.

But the truth is, the cabinet has only signed to cancel the old TM. 6 in order to allow a new form to be used, starting Oct. 1, according to a statement by the Ministry of Defense published by Thai News Agency.

The introduction of the new form has nothing to do with this week’s complaints by fliers at Don Mueang, who had to wait as long as four hours to get through immigration — the cabinet approved the new TM. 6 in January of this year.

How is the new TM. 6 different than the old one? It’s not, really. From an example published online, the new form requests the same information but the formatting is reduces the form from three to two pages. The new form also contains barcodes.

Interior Minister Anupong Paochinda spoke to Thairath about the false reports that the card was scrapped. He said that the TM. 6 card is still useful for the Tourism Ministry to collect information on the country’s visitors.

The immigration bureau also has also issued a statement to confirm that we will still have to fill out immigration cards after all. The statement was signed with their motto: “Good guys in, bad guys out.” 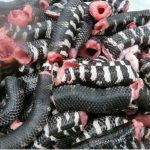