Thai love scammer marries 8 men, flees with all the dowries

One of the victims, Prasarn Tiamyam, 32, filed a report at the Crime Suppression Division yesterday against “ex-wife” Jariyaporn “Nammon” Buayai, 32, who allegedly cheated him of a THB200,000 dowry four days after their wedding at a seaside resort in Prachuap Khiri Khan province.

Following a viral post on social media that warned Thai men to look out for this dowry scammer, Prasarn, who is now remarried, came forward to the police after finding out his past marriage was a lie. Speaking to Amarin TV, Prasan said that he got to know Nammon when she added him on Facebook in February of 2015. After only nine months, he agreed to marry her because she said she was pregnant.

Yesterday, police in the northern Leoi province visited the house of Nammon’s parents in Wang Sapung district, only to find out her parents also fleed. The police only found Nammon’s older sister, who said she has already cut ties with Nammon because her little sister never returned THB10,000 (about USD300) that she borrowed. The older sister, who was not named, pled via media for Nammon to turn herself in, adding that she was very worried about their parents,

Meanwhile, another man, who declined to be named, told Khaosod that he also met Nammon on Facebook and was allegedly cheated of THB500,000 in dowry in February of this year. Speaking to Amarin TV, Prasan said that he got to know Nammon when she added him on Facebook in February of 2015. After only nine months, he agreed to marry her because she said she was pregnant. According to an Aug. 30 viral Facebook post about Nammon, she got married approximately once a week in August, to five different men. As of today, there is no verifiable report as to exactly how many men she been married to. Coconuts Bangkok 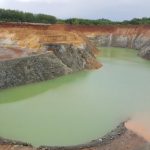 Thai government and Australian gold mine ‘close to agreement’ to reopen

UK: McDonald’s staff go on strike for the first time