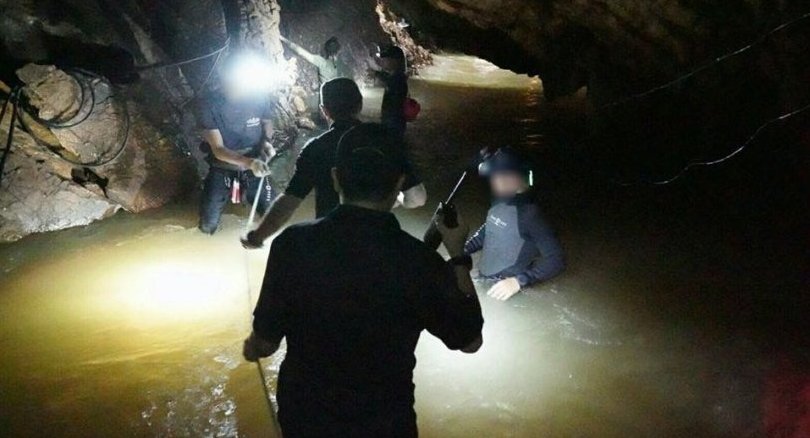 Chief’s theory not shared by authorities, who are focused on reaching ‘Pattaya Beach’ chamber

A FORMER Mae Sai district chief said yesterday that he did not think the missing team of 12 footballers and their assistant coach are taking shelter at the so-called “Pattaya Beach” in Tham Luang cave in the district, as the on-site authorities have suggested.

Preecha Sripetch said he person?ally believed that the team may have by now retreated from the flooding and moved to the end of the cave which has the highest ground that is never flooded.

The current rescue strategy is to focus resources on getting to the “Pattaya Beach” chamber.

Preecha said he was speaking from his own experience as he had travelled inside the cave to its end point about 20-25 years ago. He hiked for about 12 hours back and forth from the entrance to the end of the cave. However, he conceded, he had visited during the dry season when there was no flooding as is the case now.

“At that time, I walked down until the first hall, which is a high land full of rock, and then a three-fork inter?section. I took the route to the right and found a dead end. The left way is waist high, and walking further leads to the spot where the Seal team is stationing,” he said.

Walking further leads to a white beach in the largest chamber of the cave, possibly having a capacity to hold about 100-200 people. The beach is now popularly know as Pattaya Beach.

From there, there was a muddy pond about 20-30 metres long, then another hall with a rocky slope sur?rounded by water.

“I noticed that there were traces of roof-top flooding. Walking fur?ther down I came to a completely flooded area where I had to dive through. After that the land is high?er and you will come to the end of the cave after walking for a long peri?od,” he said.

“My personal view is that the missing team will be at the end of the cave because it is the safest spot due to its height and there is no history of flooding there,” he said.

The rescue mission is now focused on Pattaya Beach based on the belief that the missing Mu Pa Academy football club players are taking shelter in its large chamber after being trapped inside the cave since June 23.

Several teams of Seal divers are trying hard to reach a flooded cham?ber connected to Pattaya Beach. Without a map, their operations are proving an uphill task. All arrangements, including medical personnel, have been prepared and are on standby until they are found.

Footballers not yet found, says governor in dispelling rumours