A taxi driver was arrested in his home after he hit 2 Korean girls with a metal pole and stole their phones worth more than 50,000 THB. The taxi stated he didn’t intend to harm the girls, he became mad after the girls kept insisting him to turn on the taxi meter.

Tanadej Tanatirapong 51 years old was arrested on the 7 of this month. Police Major General Samran Nuanma reported that the emergency 191 line was notified of an attack and robbery against 2 Korean girls in Vibhavadee Rangsit 8 Road. The girls reported to the police that they were on an orange taxi on the 3rd of this month, they couldn’t remember the license number.

They were traveling from a mall on Ratchadapisek Road to Samut Prakan Province near Bangkok. While on their way, the taxi driver drove off the route to a somewhere with not many people. The driver then hit the girls with a metal pole and stole their phones, a Samsung Galaxy S8+ worth 26,000 THB and a Samsung Note 9 worth 28,000 THB.

The taxi then left the girls who were drunk and injured by the road and drove away. A good citizen found the girls and called the police which leads to the arrest of the taxi driver. The driver was arrested at his home on Phayathai road.

Tanadej the driver stated that he didn’t intend to hurt the girls. They had an argument where both girls kept complaining and asking him to turn on the taxi meter. Tanadej became mad which lead him to do what he did. After stealing the phones from the girls he sold them for 5,000 THB per phone at a phone shop on Huaykwang Road.

After checking Tanadej’s criminal record, turns out he has robbed a passenger before. In the last case, Tanadej made a passenger go push his car then drove away with over 200,000 THB worth of personal belongings of the passenger. 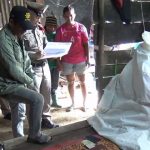 Mark KellyFebruary 27, 2020
May 20 will mark the point at which all adults in England will be considered...
END_OF_DOCUMENT_TOKEN_TO_BE_REPLACED