Dash cam footage captured a taxi driver repeatedly shunt another road user then threaten him with a jack lift.

The motorist was driving on the Pahonyothin Road on Monday afternoon in Bangkok when the cabbie became aggressive.

The taxi pulled in front of the man’s car and deliberately shunted it then stopped and pulled the tool from the boot.

He repeatedly swears at the other driver in Thai. Road users then had to step in and calm down the cabbie before traffic police arrived and arrested him.

The cabbie, named later as Khun Tamyoung, 45, admitted ‘’getting hot-headed’’ and blamed stress because he was lost.

He was charged with negligent driving and causing fear to other road users and fined 400 baht. The other driver was also fined 400 baht for driving carelessly.

The motorists, who recorded the incident wanted to remain anonymous, said: ‘’The taxi driver try to kill me but he was fined 400 baht and released. I don’t think that’s fair, it’s too lenient for what he did.” 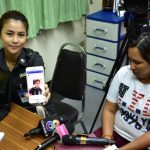 Bangkok taxi driver arrested for “stealing” 200,000 bahts worth of belongings