A man has taken to social media to warn others about an alleged foreign scammer operating in the Huai Khwang area of Bangkok.

Police said Wednesday they are unaware of reports of a man scamming pedestrians and Starbucks coffee patrons in Bangkok’s Huai Khwang area.

In a video posted online Tuesday, a man identifying himself as Patto described the foreign man’s alleged con. He said the man has been approaching Thais in the Rama IX area, claiming he’s been robbed of his passport and wallet and asking for taxi money.

“He will act like he’s in big trouble because he got robbed,” Patto says in the video. Then he’ll ask where the Singaporean Embassy is, and since it’s far from the Ratchada area, will say that it’s too far and hint that he needs money for a taxi.”

Patto said the man approached him twice over the space of a month while he was sitting at Starbucks in Unilever Tower.

The video has been viewed more than 185,000 times since it was posted to The Queen of Spades, a popular clearinghouse for controversy. While soliciting people for cash may not be a crime in itself, the post gained viral attention due to its platform on the popular page as well as drawing comments from people saying that they, too, have been asked for money in various places around Bangkok.

Facebook user Prapapan Bualek wrote to say he had the same experience with the same man.

“I met him too. I told him, ‘That is too bad! You should report the passport loss immediately. Come with me to the police station. My brother is on duty right now. He can help.’ I guarantee that he disappeared immediately.” 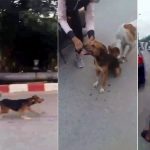