Vichien Pongpanit spoke to the Pattaya City Council Sept. 27 to advise members that the tourist attraction had, at first, fully cooperated with efforts to remove encroaching structures but has, in recent months, stalled demolitions and even rebuilt structures on the affected land.

The lack of progress means the city now has little choice but to sue the tourist attraction owned by the head of poultry giant Saha Farms.

Vichien said the ostentatious Sukhumvit Road mansion can be charged with numerous offenses ranging from encroaching on public land, building unlicensed structures and reclaiming land from the sea.

The lawsuit would cover three main areas, he said. First would be intrusion on a beach footpath by laying artificial turf and putting chairs on an area already cited for encroachment.

Second, while Sukhawadee quickly demolished a cited building on Banglamung Soi 8, it then fenced off the public road and allowed buses to park there.

Finally, there are 11 rai of public land adjacent to the beach that officials suspect was illegally reclaimed landfill. Soil testing will be done to confirm it. If so, the tourist attraction will be prosecuted for reclaiming public seafront. 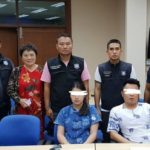