Sting Nabs: A Pathum Thani man was arrested in a police sting on Monday for allegedly printing Bt14,000 worth of Bt1,000 notes to buy two drones to resell.

Pol Colonel Kantapong Nilkham, commander of the Bang Bal police station in Ayutthaya, told a press conference on Tuesday that Chakkawat Samanukorn, 37, was arrested at the car park of the Big C Pathum Thani shopping mall.

The police stationed conducted a sting operation that led to the arrest after Bang Bal resident Kittisak Suksalee, 37, filed a complaint that he had been cheated by Chakkawat.

Kittisak said Chakkawat had contacted him with the intent to buy two drones for Bt14,000 on Monday. Kittisak said after Chakkawat gave him 14 Bt1,000 notes, he took the drones and sped off in his car.

Kittisak said he later learned that the bank notes were counterfeit and that Chakkawat had already posted an online ad to sell the two drones.

A policeman of the Bang Bal police station then offered to buy the drones from Chakkawat and arrested him when he came to deliver the goods.

Kantapong alleged the suspect had admitted to making photocopies of Bt1,000 notes to buy goods online to resell. He said he had done it several previous times. 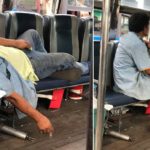 Bus conductor fined Bt1,000 for smoking on board