Seven people have been charged after an armed robbery was staged last month on the French film set of hit Netflix series ‘Lupin’.

Around twenty hooded thieves attacked the film crew by launching fireworks at them, a Netflix spokesperson said.

None of the cast or crew who were on set – reported to include the show’s star Omar Sy – were injured.

The crew were attacked while they were filming in the Nanterre district, west of central Paris, forcing production to briefly pause.

The seven accused, aged between 13 and 21, now face charges of armed robbery as part of an organised gang and receiving stolen goods, according to Agence France-Presse.

Three of them are being held in custody while four are under judicial supervision.

Police say they are still looking for more of the assailants, and have recovered some of the stolen equipment.

Inspired by the fictional French master of disguise Arsène Lupin, the show tells the tale of professional thief Assane Diop who is played by Omar Sy.

The show’s first season, released last year, was watched by millions around the world and is the first French series to enjoy such huge success on Netflix.

Lupin is not the only high-profile Netflix production to be targeted by thieves this year.

The day before the Paris heist, robbers in South Yorkshire in the UK stole more than 200 antique props from the set of The Crown TV series.

The stolen items were valued up to £150,000 and included a replica of a Fabergé egg which was owned by the Queen’s grandfather George V in 1933. 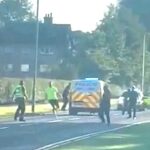 Moment knife-wielding thug is knocked down by police car 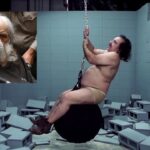